Feel the Rhythm of KOREA Again 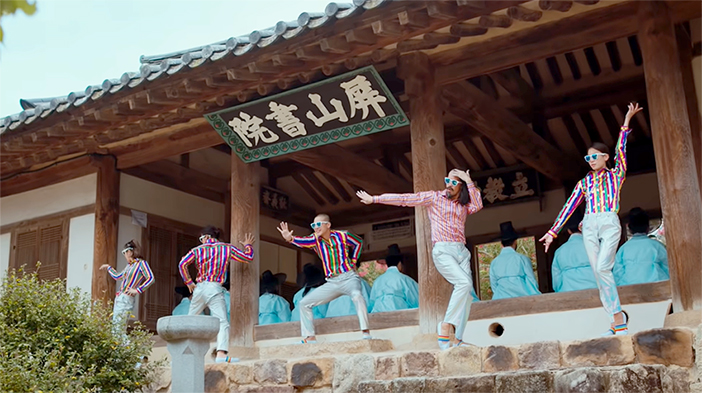 The modern-infused pansori and energetic dancers in the first three videos of the Korea Tourism Organization’s “Feel the Rhythm of KOREA” video series on YouTube captured the attention of the world! Following on this popularity, three more videos were produced in Gangneung, Mokpo, and Andong. The upbeat music and hilarious dance moves will have you itching to join in the fun!

Related content
- Traveling to Feel the Rhythm of KOREA

Feel the Rhythm of KOREA: GANGNEUNG 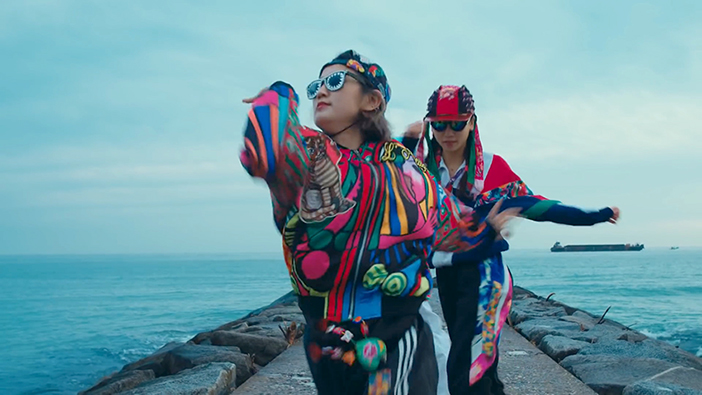 A couple aiming to recreate a scene from the popular drama “Guardian: The Lonely and Great God (2016)” are interrupted by dancing goblins! The breakwater at Yeongjin Beach is a popular location for fans of the drama, appearing as the scene where the Goblin gives white buckwheat flowers to his bride. Visiting in person, it’s easy to see why it’s so popular; the blue sky and deep blue ocean meeting at the horizon create a spectacular background for anything standing on the breakwater. 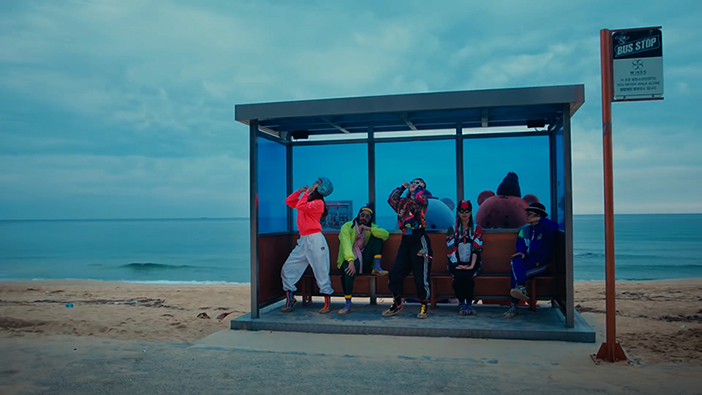 A lone student bobs her head to music while waiting for the bus. Shortly after, the goblins are seen dancing at the same bus stop. This bus stop has become famous as the BTS Bus Stop, after it appeared as the album cover image for BTS’ second full album. It isn’t an actual bus stop, having been originally built just for the BTS photoshoot. However, it was so popular among fans that the city of Gangneung decided to reinstall the bus stop, creating a super popular photo attraction. The bus stop is located at Hyangho Beach, offering plenty of outdoor activities like camping and surfing.

Goblins dance before a grand Buddha at Naksansa Temple 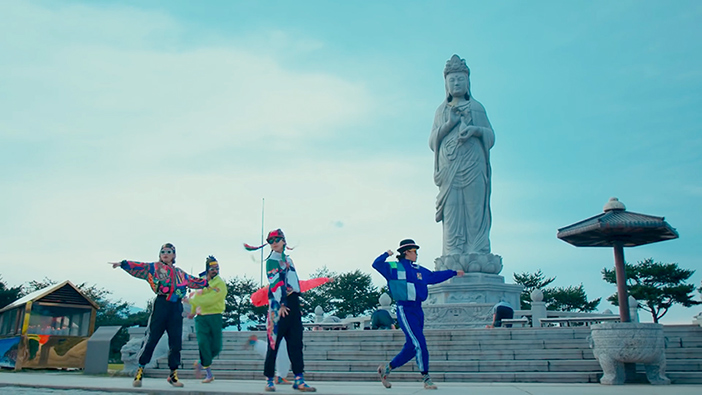 The goblins appear unfazed as they dance before a grand Buddha statue. They are at Naksansa Temple, founded in 671! The temple was destroyed in 2005 by a large forest fire, but many experts were called in and the temple was restored to its current appearance. The temple is famous for beautiful coastal views, and for the largest coastal Avalokitesvara Bodhisattva Statue in Asia. Many people visit on New Year’s Day to catch the first sunrise from Uisangdae Pavilion.

Feel the Rhythm of KOREA: MOKPO 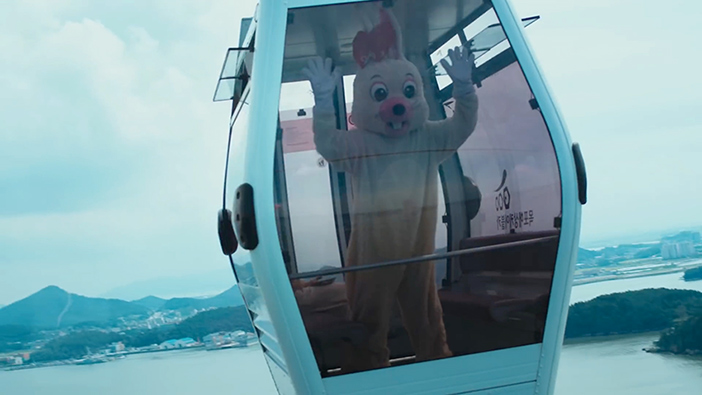 The Mokpo video starts out with a rabbit escaping by riding a cable car. This scene matches the song of the video, which relates to the Korean folk tale "The Rabbit's Liver." In this story, a sea turtle is sent by the sick Dragon King to get a rabbit's liver to cure his disease. The rabbit, not easily fooled, makes his escape by saying he left his liver at home. The song is from the point of view of the sea turtle, advising others to not be fooled by the wily rabbit. The cable car the rabbit is riding is Mokpo Marine Cable Car, opened in September 2019. It has become a major attraction in the city, stretching 3.23 kilometers over both land and sea. To take it all in, be sure to ride in a crystal cabin, with clear glass floors. The cable car also operates in the evening, so you can enjoy the golden sunset and the nightscape of this coastal harbor town.

Goblins search near and far from Yudalsan Mountain 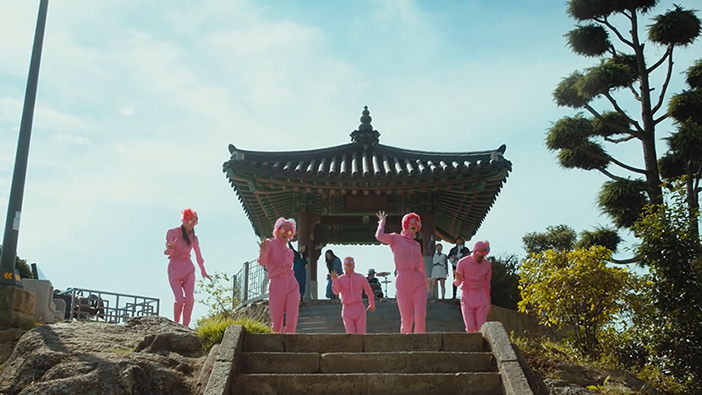 While the goblins use the vantage point of Yudalsan Mountain to search for the rabbit, viewers can see the band Leenalchi singing in the pavilion behind them. The mountain is a famous attraction in Mokpo with many beautiful and fantastic rock formations. The view from the summit includes hundreds of islands that make up the Korean archipelago. Additional sites of Yudalsan include the 4.19 Memorial Tower, Loyalty Tower, and a sculpture park.

Goblins dance at a salt farm in Sinan 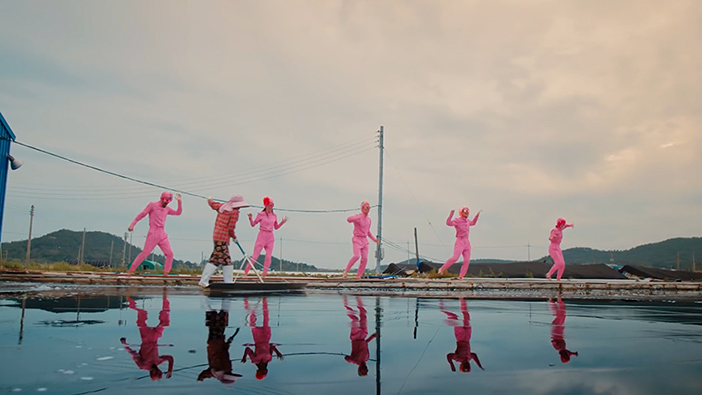 Hunting for rabbits can be hard work, so the goblins decided to take a dance break. Meanwhile, a salt farm worker continues to push the water around the salt farm. This scene was filmed at Sungui Salt Farm on Aphaedo Island in Sinan, a 20-minute-drive from Mokpo. Sinan is famous for their large salt farms, due to their many mudflats and sections of reclaimed land. The salt farmed here is highly valuable, being harvested using natural methods such as sunlight and wind to evaporate the water, leaving salt with a low level of chloride. If you want to learn more about salt farming, visit Taepyeong Salt Farm on Jeungdo Island, as they offer a museum, café, and even salt farming experience.

Feel the Rhythm of KOREA: ANDONG 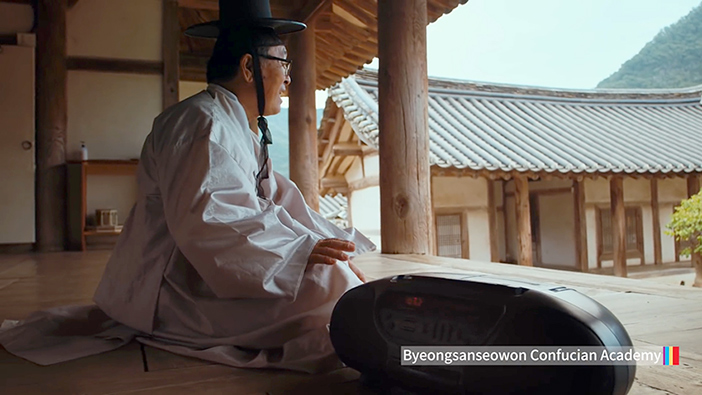 The Andong video starts out with a retro vibe, featuring an old man wearing a gat (traditional hat) pressing play on a stereo. He is sitting on the open floor of Byeongsanseowon Confucian Academy, an educational institution from the Joseon dynasty. This academy was founded by the students of Yu Seong-nyong, a civil minister. All seowon are built with nature in mind, but Byeongsanseowon stands above the rest, earning it the recognition as a World Cultural Heritage site by UNESCO in 2019. The academy now runs an overnight seowon experience program, teaching about the life of scholars in the Joseon dynasty. 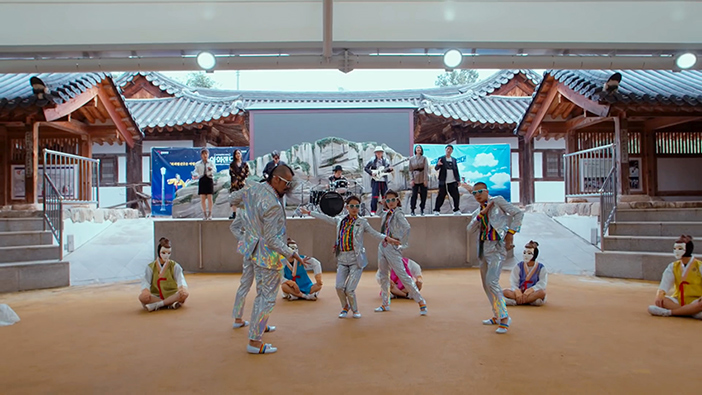 The goblins show their performing arts skills before people wearing smiling hahoe tal (masks) in a courtyard performance space. The stage is located in Hahoe Village, a representative clan village of Korea, home of the Pungsan Ryu clan for over 600 years. The village has carefully preserved the culture of Korea’s aristocracy, earning it recognition by UNESCO. The village performs hahoe byeolsingul tal nori, an entertaining performance that prays for peace, every week; plan your visit just right so you can see it.

The stage is set before Buyongdae Cliff 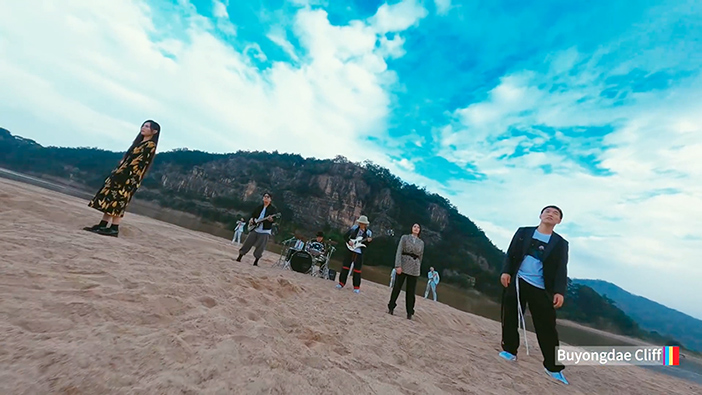 The goblins and Leenalchi can be seen performing together on a wide sandy beach before a sheer cliff. They are standing on the riverside of Nakdonggang River as it flows between Hahoe Village and Buyongdae Cliff. The cliff is about a 10-minute walk from the village, and offers a complete view of the entire area from the top. It has been used as a filming site for internationally popular dramas such as “Mr. Sunshine (2018)” and “Kingdom (2019).” If you happen to visit Korea in fall, plan a trip here in the evening to watch the seon-yu fire string play, a traditional fire show.

* This column was last updated in January 2021, and therefore information may differ from what is presented here. We advise you to check details before visiting.