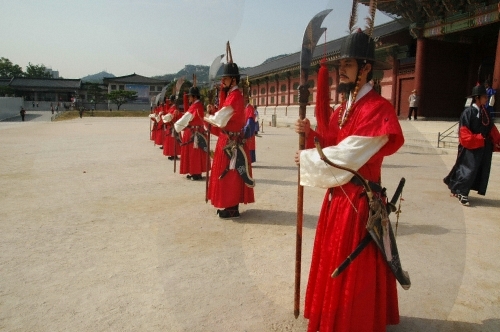 Introduction
In the Joseon dynasty, the royal guards of the palace were gatekeepers who were responsible for guarding the the main gates of Gyeongbokgung Palace as well as the main gates of the city such as Heunginjimun Gate and Sungnyemun Gate. The royal guards worked in shift duties and were in charge of opening and closing Gwanghwamun Gate. Before the royal guard system was enforced in 1469, the palace gates were protected by soldiers of the central army. The Palace Royal Guard Changing Ceremony held at Gyeongbokgung Palace and the Gwanghwamun area reenacts the guard-changing procedure that took place during the Joseon dynasty, along with the reproduction of costumes and weapons, based on historical records.

* Schedule is subject to change; refer to the official website for details.
* Events may be canceled in the case of rain.