* Tourist trains and attractions subject to closure or limited access due to COVID-19. Check the official website before visiting. 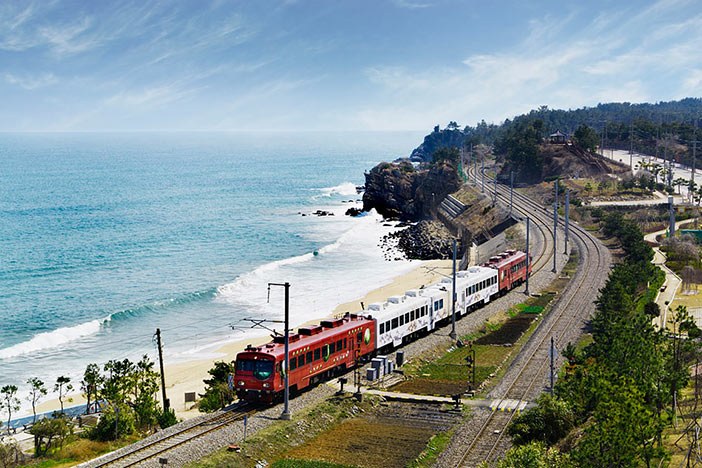 The ‘V’ in V-Train stands for "valley," as it travels through the beautiful valley of Cheoram in Gangwon-do as well as Buncheon and Yangwon in Gyeongsangbuk-do. Riding on the V-Train is especially refreshing as the windows can be opened to feel the breeze. Traveling at a leisurely speed slower than regular trains, passengers can easily enjoy the changing views of the mountains and valleys. This train was designed as an eco-friendly train and has no restrooms installed.

The West Gold Train travels along the west coast with the ocean shimmering in gold from the sunlight. The interior of the train is as extravagant as much as its name and exterior, equipped with a café car, foot bath car, ondol car and more for passengers to enjoy. Passengers can use various amenities with a separate fee; check the details before boarding.

The South Coast Train (S-Train) has an exterior designed to resemble the Geobukseon (turtle ship) of General Yi Sun-sin. The train is decorated with a carpet that looks like waves crashing down and also has a special car that has an old school atmosphere. There are two different routes: Seoul to Yeosu and Busan to Boseong, providing an option for passengers to depart from the station that is more convenient.

The Jeongseon Arirang Train (A-Train) expresses the beautiful Korean folk song “Arirang” by traveling through clean nature of Jeongseon in Gangwon-do. The train runs twice a day, except on Mondays and Tuesdays. The train will operate on those two days only if they overlap with the Jeongseon 5-day Market day. Visitors can enjoy beautiful scenery of Jeongseon through the large glass windows.

The Sea Train offers refreshing ocean views through the wide windows as well as entertainment through uniquely designed cars. The first and second cars include Propose Rooms for couples where they can enjoy a glass of wine during their romantic ride along the ocean shore. The third car is equipped with Sea Train Café, where passengers can purchase a cup of coffee, light snacks, and even local products from the eastern coast region. The interior of the train is decorated in an undersea motif with images of diverse marine animals, serving as a perfect backdrop for memorable photos.

Rail Cruise Haerang combines the luxury of cruise and hotel into a tourist train. The cabins are divided into hotel room types: Deluxe, Suite, and Family. The train is also equipped with various facilities as well as high-class food and beverage services, including wine and cocktails. Rail Cruise Haerang has three different courses to suit the luxury needs of the passengers.

Course (Train stops)
* Schedule subject to change every 2-3 months depending on seasonality; check the official website for details

Rail Cruise Haerang
More info
This page was last updated on August 25, 2021, and therefore information may differ from what is presented here. We advise you to check details before visiting.
PERFECT FOR YOU! view
view all
Make an inquiry