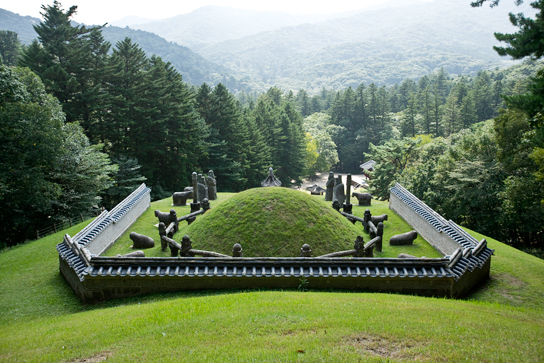 Seonjeongneung, the name of the site which comprises Seolleung and Jeongneung Royal Tombs, is famous for its tranquil and pleasant promenades. As it is conveniently located in Samseong-dong, downtown Seoul, couples and office workers often go there for a leisurely walk. Most people see the place as a peaceful area to relax. The Seoulites often call the place  'Samneung Park' (meaning "three tomb park") as a more friendly nickname. Even after the hardships of Korea's history, the tombs were well cared for and managed in memorial of King Seongjong (r. 1469-1494), his wife Queen Jeonghyeon (r. 1480-1494), and King Jungjong (r. 1506-1544) of the Joseon Dynasty (1392-1910).

Seooreung is the second largest royal burial site of the Joseon Dynasty after Donggureung. In Korean, it means five tombs ('Reung' refers to the tombs of the Kings and Queens) located to the west ('seo' means west in Korean) of Seoul. The place relates to memories of the crown prince Uigyeong (1438-1457), who unfortunately died young due to an ailment and was put to rest in Gyeongneung Tomb. The rest of the five tombs consist of Myeongneung, Changneung, Ingneung and Hongneung Royal Tombs.

Donggureung, on the other hand, is a historical venue set in the eastern part of Seoul. The site features nine royal mausoleums and they are observed to be comparatively larger than others, where total of 17 kings and queens are entered. Gyeongneung Royal Tomb is especially worth noting due to the interchanged burial positions between queens and kings as well as being the only burial site that entombed two wives of one king, King Heonjong (r.1834-1849), together in one place.

Jangneung is the tomb of Danjong, the 6th king of Joseon (r.1452-1455) whose throne was abdicated by his uncle. Leaving the royal palace upon exile, the king spent the later years of his life in Yeongwol until his death. To mourn and commemorate his unfortunate life, the tomb was built; however, unlike most of the royal tombs, it was enshrined at the farthest point from the capital. But thanks to its geological distance, it benefited by being unharmed by external forces. The area is surrounded by green and has been guarded by a sacred gate called Hongsalmun (meaning ‘gate with red arrows’ in Korean), adding extra care in protection.