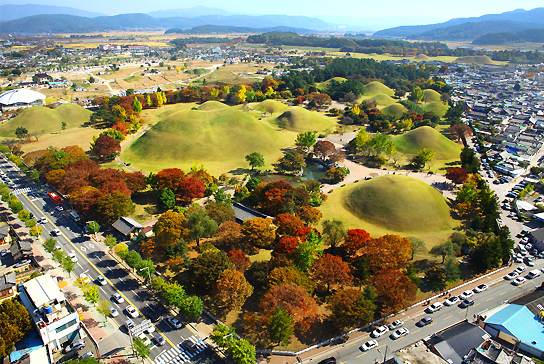 Description:
Gyeongju Historic Area is a historical attraction where the achievements and culture of Silla have remained well-preserved. In the Gyeongju area, there are many sites and monuments important to the 1,000 years of development of Korean architecture and Buddhism. Over 52 cultural heritages were designated by UNESCO and the area is divided into 5 zones based on their characteristics: the Namsan Mountain area, showing the beauty of Buddhist art; the Wolseong Fortress area, the royal grounds of Silla dynasty; the Daereungwon Tomb area, the tombs of high-ranking officials including the kings of the Silla Dynasty; the Hwangnyongsa Temple area, showing the essence of Silla Buddhism; and the Sanseong Fortress area, focusing on the defensive mechanisms of the royal capital.

Poseokjeongji (Poseokjeong Pavilion) in Namsan Mountain of Gyeongju is a stone waterway carved into a raised rock platform.

This is where the Silla Kings would come with their officials and nobles for parties. It is said that they would float their wine glasses on the water as it flowed along the stone groove, showing the Silla people's love for a cozy and relaxing atmosphere.

Constructed during the reign of Queen Seon-deok (632-647), Cheomseongdae was used for observing the stars in order to forecast the weather. It is the oldest existing astronomical observatory in Asia.

Astronomy was related to agriculture because the movement of the stars could influence the farming schedule. The obveratory is also highly valued as proof of the advanced sicence technology of the Silla Dynasty.

Bunhwangsa Temple was where the prominent Buddhist priest Wonhyo resided. The stone brick pagoda in front of the temple has become one of the must-see sites in Gyeongju, as it is the oldest stone pagoda remaining from the Silla Dynasty. The stone pagoda was made of well-cut bricks and very uniquely built, representing the carving style of Silla dynasty.

Large ancient tombs of kings and nobles of the Silla Kingdom can be seen around Gyeongju at Daereungwon Tomb Complex, including Cheonmachong Ancient Tomb. During an excavation of the tomb, Cheonmachong was discovered with a painting of a mounted horse, giving the tomb it's name ('Cheonma' means heavenly horse in Korean). There are over 10,000 remains and relics inside the tomb, making it a living museum for studying the ancient art and exchange of culture among other nations.