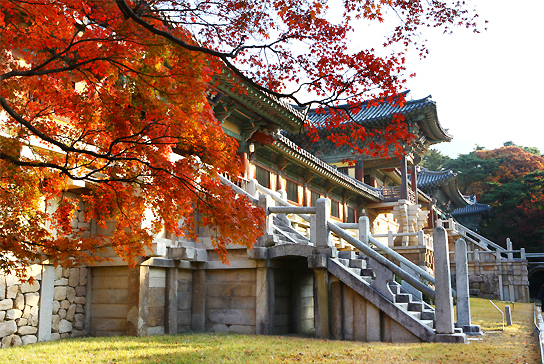 Description:
Seokguram Grotto and Bulguksa Temple are ancient Buddhist temples of Korea, which were established in the mid-8th century during the golden era of the United Silla Dynasty.

These two heritages represent the highly developed architectural skills and creative craftsmanship of the Silla people. In particular, the magnificent and sublime beauty of Seokguram's carvings and Bulguksa Temple's stylobate and its two stone pagodas are considered some of the masterpieces of Buddhist architecture, unparalleled in all of Northeast Asia.

Seokguram is an artificial stone temple made of granite. Inside the round-shaped main hall are the Bonjon Statue, Bodhi-sattva and his disciples. Seokguram was built to preserve these statues. The majority of the stone statues, including the Bonjon figures have high value in cultural heritage for having sur vived the passage of time with the original structure still intact since the 8th century.

Bulguksa, literally translating to Temple of the Land of Buddha, was built with the aspiration for Buddha's utopia. The temple was damaged in 1592 by the Japanese during the Imjin War, when all the wooden structures of the temple completely burned down. Luckily, the stone altars, bridges, pagodas, lanterns and bronze statues of the Buddha escaped the fire, and have been well preserved up until now. A partial restoration was conducted from 1969 to 1973, which resulted in the current structure.

The Bonjonbul figure is a giant statue of the Buddha, 3.3 meters in height and 2.7 meters in width. While most statues of Buddha were carved in a standing position wearing a generous smile, the bonjonbul is seated on a pedestal, emanating a sense of grandeur.  From the solemn and grave facial expression to wrinkles in the statue's dress, all details were meticulously carved, representing the splendid and prosperous Buddhist culture of the Unified Silla era.

A key point at Bukguksa is the relief of 10 disciples, a rarity in World Buddhist Art history.
It is highly appreciated for its uniqueness and artistic characteristics for vividly capturing the disciples who are diligently carrying out their tasks as Buddha's followers.
The smallest disciple is about 2.08 meters in height the tallest is about 2.2 meters.

Seokgatap, located on the western side of the temple, has two stereobates (stone foundation levels) and is crafted in the traditional pagoda style of the Silla period. Dabotap, which is also called Muyeongtap, is quite simply designed, yet has an imposing appearance, radiating a feeling of stability.

Dabotap,standing on the east side of the yard before Daeungjeon, was distinctively different from other stone pagodas of the Silla era. Remaining completely intact since its establishment, it has been said that the stone tower was based on the shape of Chilbotap, a tower from Buddhism scriptures made of seven treasures.

Although Dabotap and Seokgatap are uniquely different, the foundation stones and stylobate are roughly the same height, providing a balanced and proportional aspect when viewing the two towers together.