Memory of the World Register 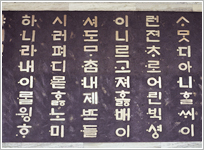 Hunminjeongeum (carrying the meaning of "Proper sounds to instruct the people" in Korean) is the former name for the present day Korean alphabet, hangeul, and it is a book that explains the principles and purpose of hangeul, as well as how to use and pronounce the letters. King Sejong, the 4th king of the Joseon Dynasty, created the Korean alphabet in order to help all commoners to easily read and write. The task was promulgated in 1443 by the scholars of Jiphyeonjeon Hall (or "The Hall of Worthies") and in 1446, the alphabet was distributed and made known to all citizens.

The shape of each letter is made according to the position of the vocal organs used to articulate the specific sound. In addition, hangeul is known to be unique among the world's writing systems for having been created at a specifiable time by identifiable people, without any direct influence from pre-existing writing systems, to become a national written language. Moreover, no other writing system has ever been implemented in an explanatory volume.