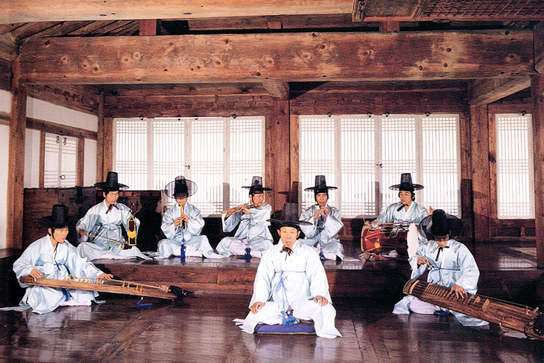 Gagok refers to a genre of Korean vocal music composed of traditional three-line poetry (sijo) and accompanied by an ensemble of native instruments, including of a twelve- or six-stringed zither and various percussion instruments. Most gagok songs are very slow, requiring a high level of concentration to control the tempo and many years of practice to perfect one's learning. The style was very strongly influenced by Korean’s characteristics of endurance and patience.

Although the present form of gagok has transformed to include songs of a more fast-tempo variety, the majority of the songs still bear peaceful tunes of slow- to medium-tempo. Gagok was originally designed for aristocrats' taste, but as it became more widespread, many commoners also began to enjoy this music style.

The major form of the songs has remained the same, largely distinguished into ‘namchang’ and ‘yeochang’ where the former is sung by a male vocalist while the latter is performed by female vocalist (nam- means man and yeo- means woman in Korean). The aforementioned Korean zithers (geomungo and gayageum) and bamboo flutes (daegeum, piri), combined with the fine voice of the singer, make the orchestra complete.