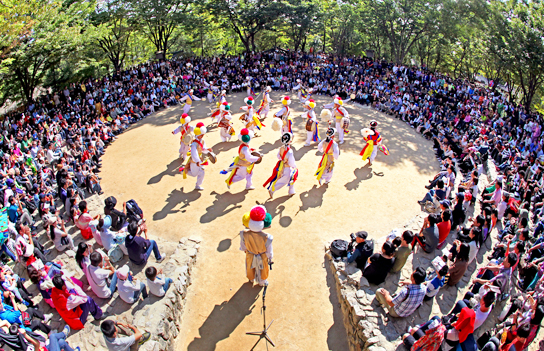 Nongak; Community Band Music, Dance and Rituals in the Republic of Korea (Designated 2014)

Nongak is accompanied by many traditional percussion and wind intruments along with a street parade, dance choreography and acrobatic moves. Though it is often perceived as a form of entertainment today, it originated from communal rites and formal rituals praying for peace and prosperity in a family and/or neighborhood. It has evolved into a representative performing art genre of Korea, with its mixed elements of dynamic energy, joy and sorrow.

Despite being widely performed and enjoyed by all Koreans, the nongak play in modern days has become somewhat limited. It is usually only shown during festivals such as praying for a rich harvest in spring, celebrating the harvest in autumn, and during a few professional entertainment events.