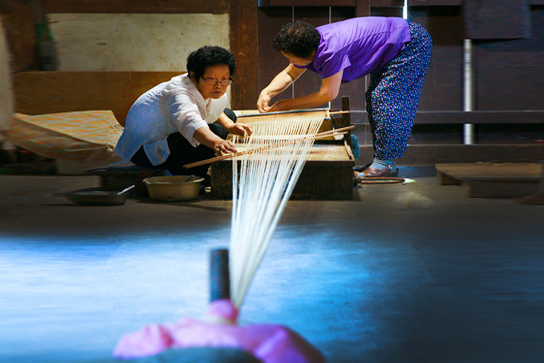 Weaving of Mosi (Fine Ramie) in the Hansan Region (Designated 2011)

Ramie fabric (mosi in Korean) produced in the Hansan region of Chungcheongnam-do is named after its origin of production, hence called "Hansan mosi" in Korean. The practice of weaving mosi is famous here due to its invaluable community asset of successfully passing down the technique over  generations for a quality-assured outcome. The masters of this cultural transmission are credited as the middle-aged women in the township who are responsible for harvesting, boiling and bleaching ramie plants, spinning yarn out of ramie fiber, and weaving it on a traditional loom.

Ramie cloth is comfortable in hot summer weather and is used to produce a variety of clothing from dress suits and military uniforms to mourning garments. Hansan boasts fertile land and sea winds that allow the ramie plants to thrive, guaranteeing a good quality product.