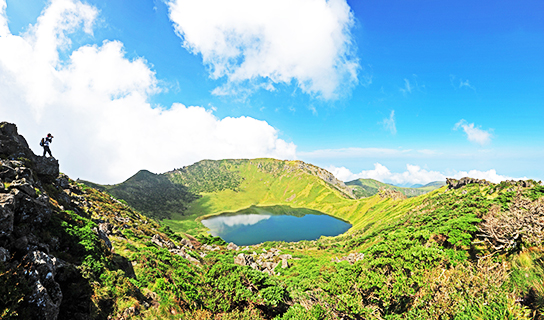 Description:
The island of Jeju-do figures significantly in terms of the preservation of biodiversity. Almost half of all the vascular plants found in Korea and about 200 endemic plant species are found on the island, together with half of Korea’s endangered and protected wild species. High on the summit of Hallasan Mountain live polar plant species that advanced southward during the Ice Age, while numerous indigenous species and endangered species inhabit the lower altitudes. Without a doubt, Hallasan Mountain is a rich ecological treasure trove, where some thousands of species of animals and flora can be observed.

On June 27, 2007, UNESCO’s World Heritage Committee listed Jeju Volcanic Island and Lava Tubes as a World Natural Heritage in view of the site’s parasitic volcano and lava tubes, as well as for its outstanding geological features and special properties as a habitat for a variety of rare and endangered species. Jeju Volcanic Island and Lava Tubes is largely comprised of three sites: the main natural reservatory site of Hallasan National Park, Seongsan Ilchulbong Peak, and the Geomun Oreum lava tube system. The lava tube system includes dozens of oreum, or a parasitic cone in English, and the five lava caves of Bengdwigul, Manjanggul, Gimnyeonggul, Yongcheondonggul, and Dangcheomuldonggul caves.

Reaching to a height of 1,950 meters, Hallasan National Park is the tallest mountain in Korea with gentle slopes formed by eons of volcanic activity. The summit area, however, is formed of a steep trachyte edifice. A variety of animals and plants inhabit the slops of this naturally formed reservoir, including groups of densely spotted Korean fir (or Abies Koreana) trees.

Because of the unique and mysterious landscape created by the surrounding 360 cinder cones and its outstanding research value, the Korean government designated the mountain as a national park in 1970, and it has been protected ever since.
In addition, the top of Hallasan Mountain offers a view of the magnificent vista over the entire Jeju Island. The peak also holds Baengnokdam, a crater lake 3km in circumference and 500m in diameter, giving helpful insights in academic research.

The Geomun Oreum refers to the series of lava tubes formed some 100,000-300,000 years ago by huge amounts of basalt lava that spewed from Hallasan volcano. The lava tubes designated as UNESCO World Natural Heritage are Gimnyeonggul Cave, Dangcheomuldonggul Cave, Manjanggul Cave, Bengdwigul Cave, and Yongcheondonggul Cave.

The largest tube in the bunch is Manjanggul Cave. In terms of both length and scale of the entrance, Manjanggul and Gimnyeonggul are among the most internationally recognized formations. Also notable is Bengdwigul, a labyrinth-type cave whose structure is the most complex of any in the world. Other caves that are outstanding in terms of geological value are Yongcheondonggul and Dangcheomuldonggul
on the southern coast of Jeju. While Dangcheomuldonggul Cave is quite small, it has a spectacular display of limestone formations. In addition, the limestone structures and geological features found in Yongcheondonggul are unmatched by any in the world.

Seongsan Ilchulbong Peak, one of the 360 parasitic cones on Jeju-do, was uniquely created on the sea floor. Some 5,000 years ago, an underwater eruption on the shallow seabed resulted in a tuff ring. Rising 182 meters above sea level, the tuff ring was originally an island, but the gradual deposit of sand and gravel formed a connection to the land. Also called "Oreum of the Rising Sun," Seongsan Ilchulbong Peak is one of the treasured landmarks of Jeju-do, attracting numerous tourists for a view of the sunrise and sunset.