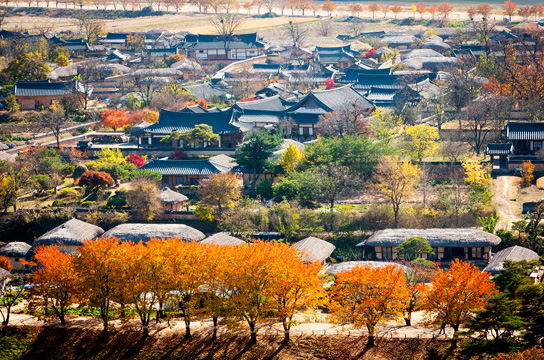 Hahoe Village is home to descendants of the Ryu clan of Pungsan for the last 600 years and is well-known for its traditional houses. Birthplace of renowned scholars of the Joseon Period such as Gyeomam Ryu Un-ryong and Seoae Ryu Seong-ryong, the village became even more famous after Queen Elizabeth of England visited in 1999 and George Bush, the former president of the United States in 2005.

The Hahoe Village features the dwelling of the yangban class, their lecture halls and various types of houses; where even today the people still reside in, creating a realistic illusion of time traveling back to the Joseon Dynasty.

The Hahoe Maskdance is a slapstick and social satire in the form of mask dancing from the perspective of the Joseon Dynasty’s commoner class. The ruling class would conduct a poetry meeting in front of the cliffs as Seonyu julbulnori, a traditional fireworks display.

Gyeongju Yangdong Village is Korea’s largest traditional village where the aristocratic yangban class lived in tile-roofed house, mostly on high hills while the dwellings typically feature thatched-roofs at the foot of the hills.

The village is well organized and clearly sectioned by the purpose and usage of the buildings. Buildings are built in different locations. Ancestral tablets were enshrined at the back of the house while a pavilion or lecture hall located in the site with beautiful and calm natural surroundings.

At the entrance of the village, Yangdong Village Cultural Center offers a variety of hands-on traditional cultural Korean activities such as art crafts, calligraphy, making a kite and experiencing millstones and mortars.