Koreans officially follow the Gregorian calendar, even though there are a few holidays that are based on the lunar calendar. During official holidays, offices and banks are closed but palaces, museums, most restaurants, department stores, and amusement facilities are open. Seollal (Lunar New Year’s Day) and Chuseok (Korean Thanksgiving Day) are the most important traditional holidays for Koreans, so millions of people visit their hometowns to celebrate with their families during these times. On Seollal, Koreans hold a memorial service for their ancestors and perform sebae, a formal bow of respect to their elders as a New Year’s greeting. 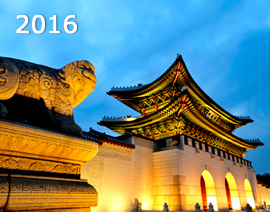 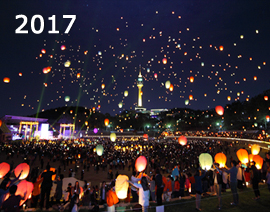 ※ Click on the image to open calendar of the respective year.

As in other countries, the first day of the New Year is celebrated.

Seollal (February 7-9, 10 as a substitute holiday)

Lunar New Year’s Day, or Seollal in Korean, is one of the most important traditional holidays of the year; the holiday is much more significant than January 1st to Koreans. Most businesses are closed, and people take several days off from work to visit their hometowns to be with their family. On the day of Seollal, everyone gets up early, puts on their best clothes, and bows to their elders as a reaffirmation of family ties. Feasts are held with specially prepared food such as tteokguk (sliced rice cake soup) and mandu-guk (dumpling soup). People play traditional folk games such as flying kites, or spinning tops.

This day commemorates the Declaration of Independence proclaimed on March 1, 1919, while under Japanese colonization. A reading of the declaration takes place in a special ceremony at Tapgol Park in Seoul, where the document was first read to the public.

On this day, parents dress up their little ones and take them to parks, amusement parks, zoos, or to the cinema for a full day of fun and games.

Marking the eight day of the fourth lunar month, elaborate and solemn rituals are held at many temples across the country and lanterns are hung in the temple courtyards to celebrate Buddha’s birthday. Especially on the Sunday before the joyous day arrives, parades featuring beautiful paper lanterns, young monks and more attractive displays fills the streets to light up the evening.

Memorial Day is set aside to honor the soldiers and civilians who have given their lives for their country. The largest ceremony is held at the National Cemetery in Seoul.

This day commemorates the Japanese acceptance of the Allies’ terms of surrender and the resulting liberation of Korea in 1945.

Chuseok is one of the year’s most important traditional holidays. It is celebrated on the 15th day of the eighth lunar month. Chuseok is often referred to as Korean Thanksgiving Day. It is a celebration of the harvest and thanksgiving for the bounty of the earth. Family members come from all over the country to visit their ancestral homes.

This day commemorates the founding of the Korean nation in 2333 B.C. by the legendary god-king Dangun. A simple ceremony is held at an altar on top of Manisan Mountain on Ganghwado Island. The altar is said to have been erected by Dangun himself to offer thanks to his great father and grandfather in heaven.

Hangeul Day, otherwise referred to as Hangeul Proclamation Day or Korean Alphabet Day, is a commemoration held on October 9th in Korea to celebrate the creation of hangeul, the country’s native alphabet as proclaimed by the publication of Hunminjeongeum on this day in 1446.

Christmas is observed as a national holiday in Korea as in many other countries.

Although Labor Day is not a national holiday, banks and business establishments are closed, and many people enjoy a day off.

ons and daughters show their love and respect for their parents on this day, presenting carnations as a sign of respect. Although this day is celebrated by many, Parents’ Day is not a national holiday, with almost all banks and shops remaining open for business with normal operating hours.

This day commemorates the proclamation of the Constitution of the Republic of Korea that was made on July 17, 1948.

* This page was last updated in November 2015, and therefore information may differ from what is presented here.