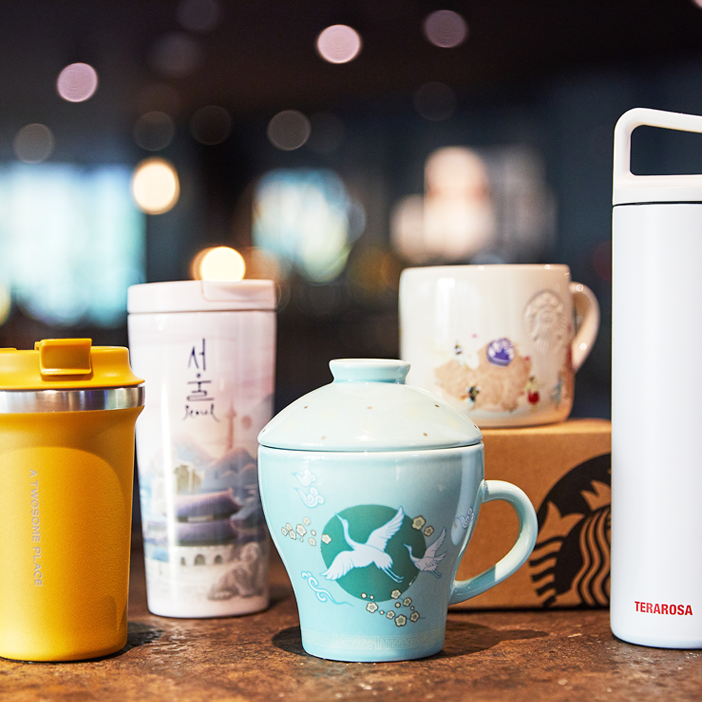 Café franchises have transitioned from simply selling coffee and baked goods to having their own merchandise for sale. Products can range from standard mugs and tumblers to special edition and promotional items. No matter when you visit, you can remember your trip back home when you use a seasonal product purchased during your time in Korea!
Annual planners At the end of every year, major café franchises release their limited addition planners for the year ahead. Getting one of these coveted planners in Korea can feel like a battle. This year, Starbucks has released four diary designs for Korea, with an additional mini calculator or card pocket coming with each of the planners. Other franchises to follow Starbucks’ lead include A Twosome Place, Hollys Coffee, and Ediya. Most cafés will give you the diary after you purchase a certain number of drinks, although some will allow you to purchase the planner directly.
Helpful tips

Mugs & tumblers Mugs and tumblers are the most common and popular café merchandise. While most franchises have the typical products with their brand on them, they also offer special items with Korean designs. At Starbucks in Korea, the Korea tour series is a great choice for tourists. The designs feature local attractions of major cities, such as Seoul, Busan, Gyeongju, and Daegu. Other items include more traditional elements, such as a mug designed like Korean porcelain, to mugs with illustrations of bukcheon sajanoreum and samulnori.
Helpful tips

Domestic brand goods Domestic coffee shops stand out by collaborating with famous brands for their products. Terarosa, perhaps the most famous domestic coffee franchise, paired up with MiiR to produce tumblers that can keep drinks warm for 12 hours, or cold for up to 24 hours! Their growlers, capable of storing coffee and other beverages like beer, are also very popular. Additional items include a photo book of Terarosa café locations throughout the country, tote bags in a rainbow of colors with different coffee brands printed on them, and soap made with olive oil.
Helpful tips