8 Inspiring Places to Add to your Jeollanam-do Bucket List 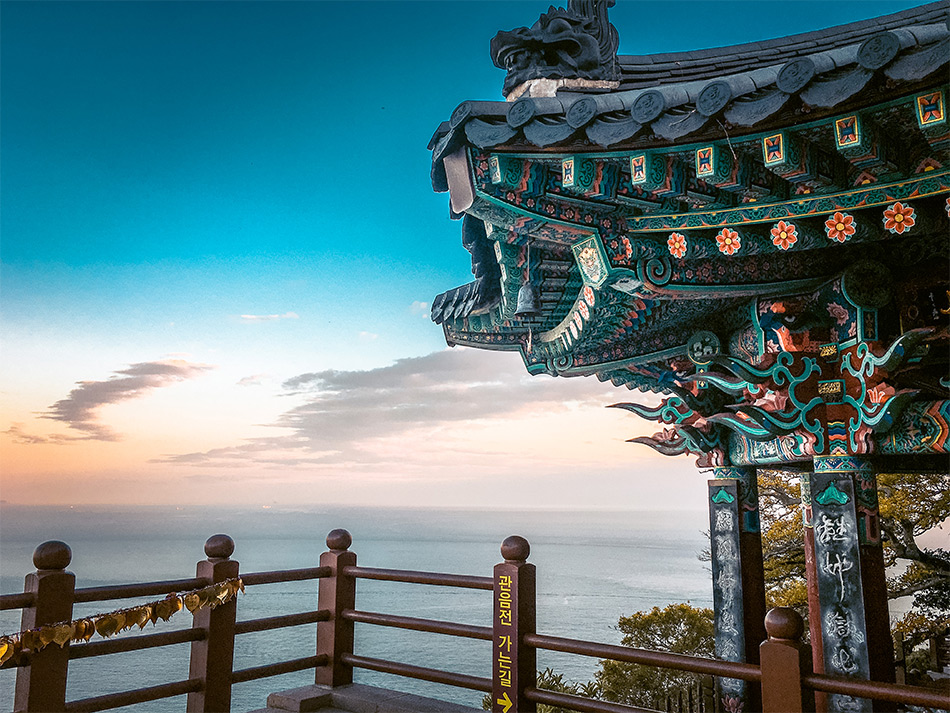 Delightful Jeollanam-do makes up the southwestern tip of South Korea. There, you can enjoy rolling green hills, over 6000 km of coastline, and some of the most outstanding cuisine in the entire country.
While the glittering lights of Seoul or the beaches of Busan might garner most traveller’s attention - Jeollanam-do is a slightly off the beaten path travel destination that’s well worth exploring.
To get you started, I’ve picked out 8 totally inspiring places you shouldn’t miss while exploring the region. 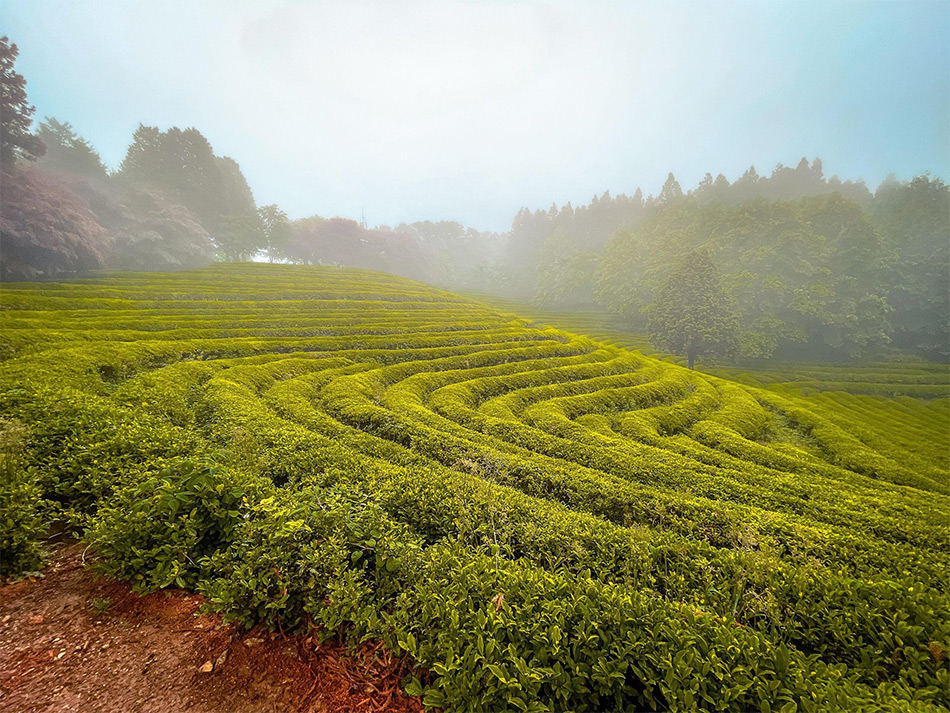 There are more than a few green tea plantations in Boseong, but the most famous one is known as Daehan Dawon. Founded in 1957, it’s the oldest, biggest, and dare I say, most beautiful one in the area. When you arrive, you’ll walk through a gorgeous laneway of Japanese Cedar trees, before entering the Green Tea Plantation. There are rows and rows of bushes planted in symmetrical tiers all the way up the hills of the plantation. Your first look at these will leave you awestruck.

If you’re after a romantic photo of lush green tea bushes curving gently across the rolling hills, the best time to visit is in April and May. At this time of the year, the leaves are a deep green and impossibly photogenic. If you can’t make it in spring, it’s also worth visiting Boseong in wintertime for its annual holiday Lighting Festival, which sees its tea bushes adorned with sparkling bulbs instead of leaves. 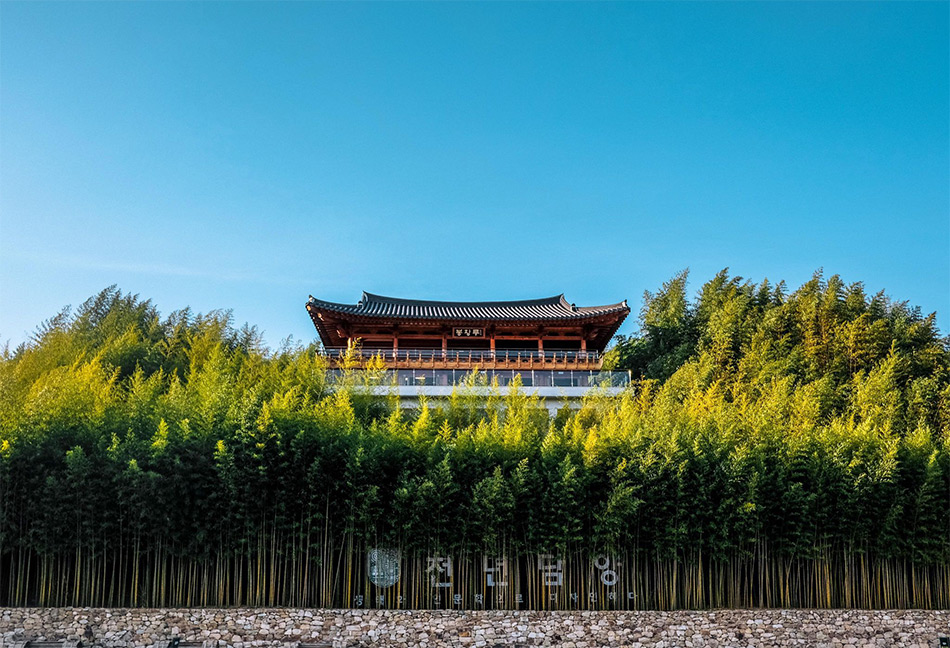 When the stress and frantic pace of life is wearing you down, a meandering stroll through Juknokwon is just what the doctor ordered. After all, what could be more rejuvenating than gaping up at a vast canopy of blue sky and green leaves, while breathing in the super rich oxygenated air around you?

Juknokwon is the largest cultivated bamboo forest in Korea. It spans a whopping 310,000 square metres in Damyang County. There are eight separate themed walking paths that wind through acres and acres of serene bamboo garden. Watch out for the Bonghwangru Observatory, the Lee Lee Nam Media Art Centre, a children’s playground, stunning pavilions, bamboo loungers, swings, and much more while exploring the eight paths. 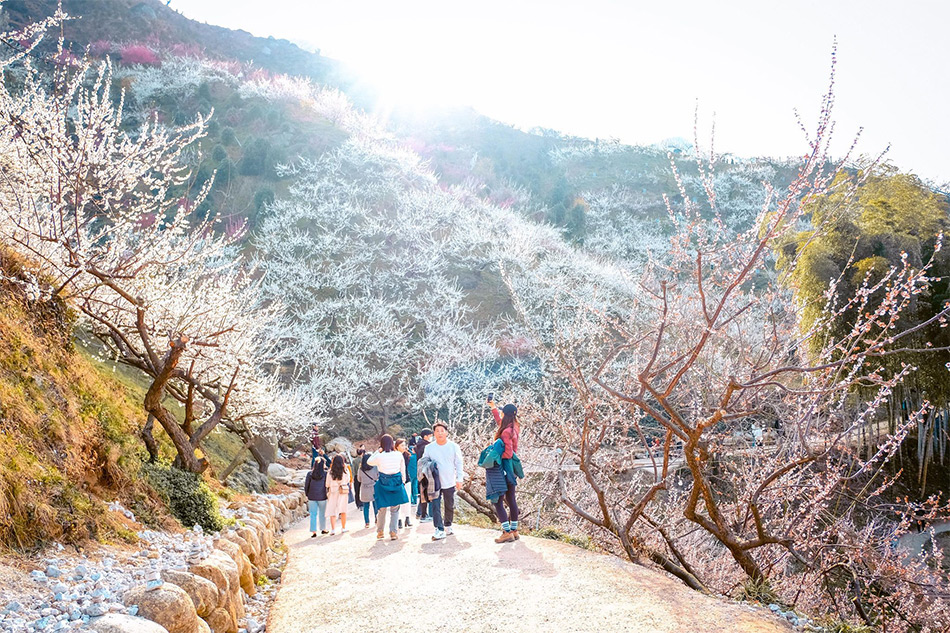 The blooming of plum blossoms in Gwangyang heralds the beginning of spring in Korea. These delicate pink flowers burst into life just before the more famous cherry blossoms (and are often mistaken for them). Maewha Village sits downstream of the Seomjingang River, which is known for its clean water. Around mid-March, the 100,000 trees create an explosion of pink upon the hills of Maewha Village that has to be seen to be believed. Hyangiram Hermitage is one of four major Buddhist hermitages in Korea. The temple complex has a few halls and pavilions to explore, but the unique beauty of Hyangiram comes from its stunning natural environment. Located on the edge of a forested cliff on Geumosan Mountain, it has fantastic views overlooking the sea. To get to the hermitage, you’ll have to hike up a fairly steep mountain trail and ascend a number of stairs. It’s well worth the effort. As you get closer to the temple, you’ll navigate your way through a series of seven narrow caves. It’s believed that if you pass through all of the caves, you will be granted a wish.

Hyangiram is especially spectacular during autumn and spring. In autumn, the trees colour Geumosan with a kaleidoscope of reds, oranges, and yellows. And in spring, the entire area is brilliantly scarlet with camellia blossoms. 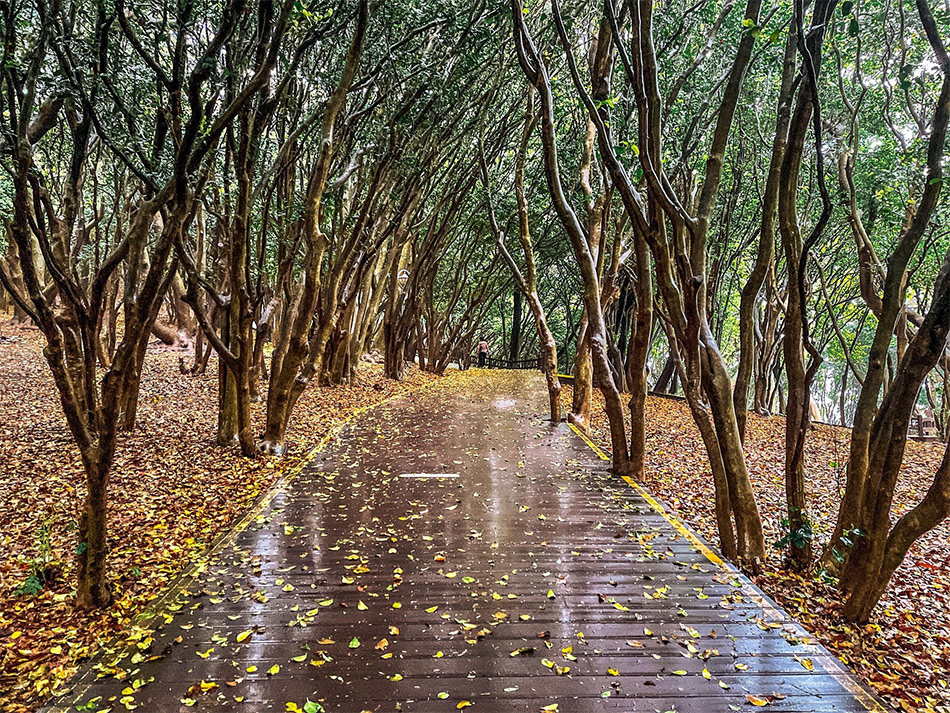 Odongdo is a small island just off the coast of Yeosu. It’s easy to walk, cycle or take the Dongbaek train along the breakwater to Odongo Island. Selected as one of Korea’s 100 most beautiful roads, there are 2.5 kilometres of forest walkways, winding around the island. It’s lush, green, and incredibly restorative.
Visit during the months of January to April and you’ll be blessed with a startling wave of crimson as Odongdo’s 300 camellia trees and shrubs begin to flourish around the island. 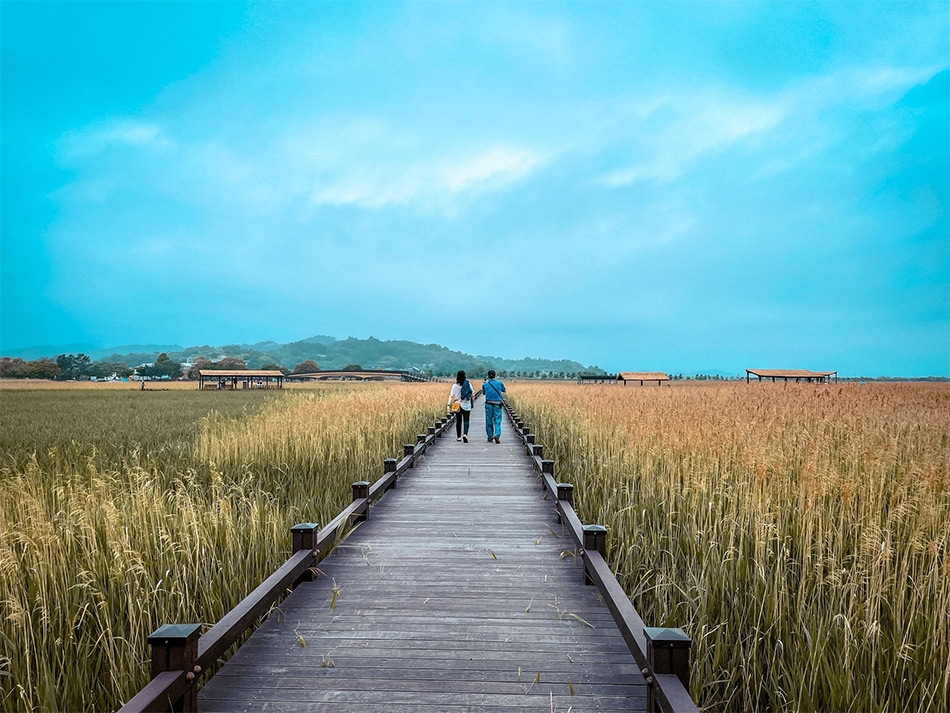 Suncheonman Bay is a massive coastal wetland, with the largest field of reeds in the country. Wandering through this incredible colony of gently swaying reeds - some taller than a full grown person - is one of the most peaceful experiences in Korea. The wetland is the natural habitat for over 140 species of birds, crabs, and other creatures drawn to the harmonious surroundings. 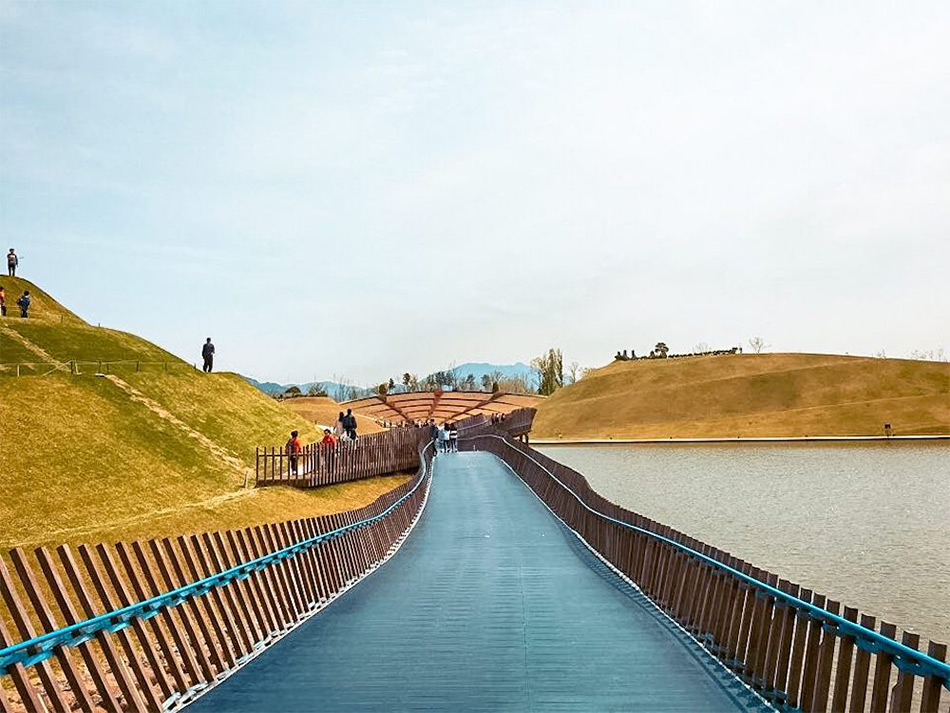 The Suncheonman Bay National Garden covers over 1.1 square kilometres of land near Suncheonman Bay. Created to protect the coastal wetland, it has almost 800,000 trees and a whopping 3 million flowers to admire in the garden. Be sure to go for a walk in the Charles Jencks-designed Suncheon Lake Garden. It’s a meditative experience with winding paths, and curvy bridges set upon a series of unique green tuff-like cones. 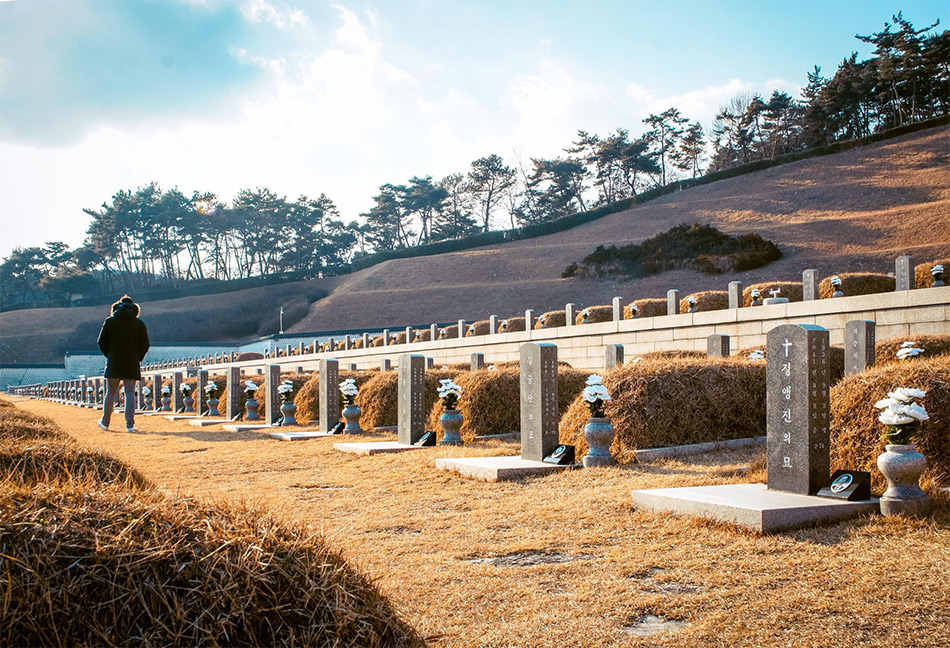 Gwangju is often considered the birthplace of democracy in Korea, due to its poignant political history. And one of the best places to learn about the country’s recent and rocky road to democracy is at the May 18th National Cemetery in Gwangju. The cemetery is the sobering final resting place for the many Koreans that lost their lives during the May 18th Democratic Uprising in 1980. This was a mass protest against the authoritarian military government of the time.

There are several monuments and memorials to explore within the cemetery. The Memorial Monument consists of two 40-metre tall parallel pillars that symbolize hope and new life. The Memorial Hall holds a historical record of the uprising, with exhibits and tributes to victims. In the Seungmoru, you can watch actual video footage of the uprising. Be warned though - some of this is quite graphic and could be disturbing to some people.

Undoubtedly, the most soul stirring place in the cemetery is the graves of the victims. Each headstone is adorned with a picture of the 764 ordinary men, women, and children who lost their lives during the Gwangju Uprising.