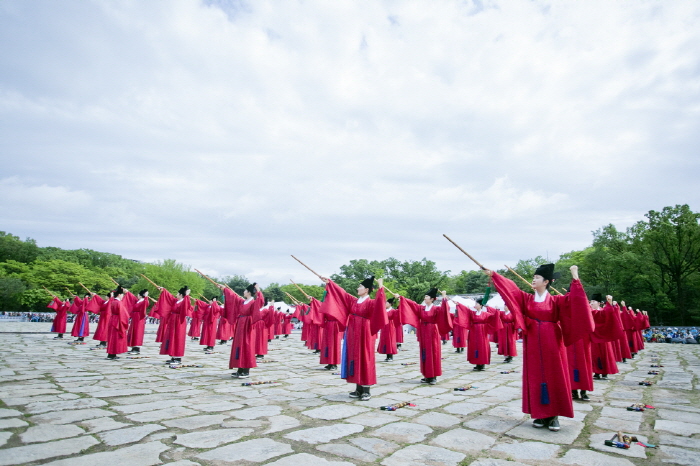 Introduction
Jongmyodaeje, Korea’s Royal Ancestral Memorial Rite, is a traditional ritual that has been recognized with many important designations. It is a UNESCO Masterpiece of the Oral and Intangible Heritage of Humanity, Important Intangible Cultural Property No. 56 (Jongmyo Jerye), and Korea’s Important Intangible Cultural Property No. 1 (Jongmyo Jeryeak). The ritual is held yearly on the first Sunday of May. It begins with eogahaengnyeol, the fabulous royal parade dating from the Joseon dynasy, which is truly a sight to behold as it moves through the modern city.

Jongmyodaeje originated as a royal ancestral ritual to honor the past kings and queens of the Joseon dynasty. During the Joseon era, the ritual was held five times a year (spring, summer, autumn, winter, and December) until it was abolished by Japanese colonial rule. In 1969, Jongmyodaeje was reinstated and has been held in May every year since.

Jongmyo Shrine, the destination of the procession, was the setting of ceremonial rituals during the Joseon dynasty. Originally, Jongmyo only referred to Jeongjeon (Main Hall) where the memorial tablets of Joseon’s reigning kings and queens are enshrined. Today, however, Jongmyo also encompasses Yeongnyeongjeon (Hall of Eternal Peace) where the tablets of posthumous kings and queens are enshrined and Gongsindang (Hall of Meritorious Subjects) where the tablets of esteemed ministers of the state are kept.

How to Particpate
Seats for Eogahaengnyeol can be reserved through Naver, free viewing from outdoor LED screening