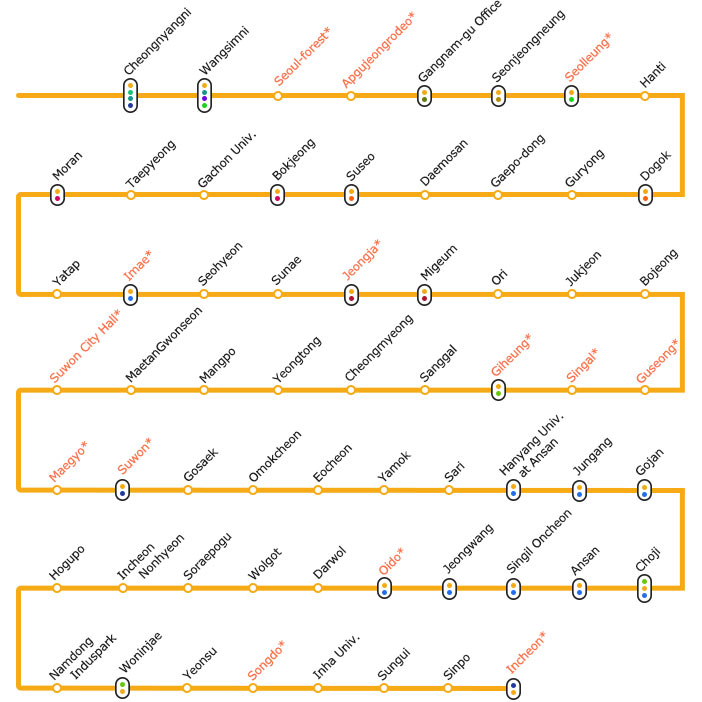 * Some attractions subject to closure or limited entrance due to COVID-19. Please check before visiting. 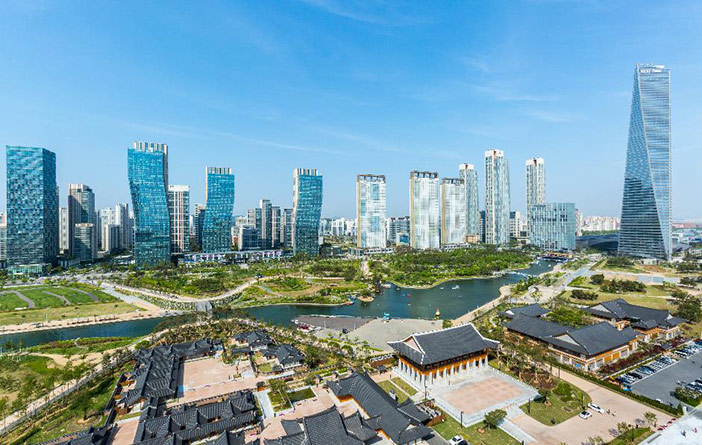 Suin-Bundang Line connects Cheongnyangni Station in Seoul and Suwon Station in Gyeonggi-do all the way to Incheon, passing by major tourist attractions in Gyeonggi-do and Seoul’s Gangnam area along the way. Notable attractions in Gangnam include Seoul Forest, Apgujeong Rodeo Street, and Seolleung and Jeongneung royal tombs; while Suwon has significant historical attractions like Hwaseong Fortress and Hwaseong Temporary Palace. In particular, Suwon Hwaseong Fortress and Hwaseong Temporary Palace are two of the most visited attractions by both domestic and international visitors for its historical importance and architectural beauty that placed them in the list of UNESCO’s World Heritage in 1997.The last stop Incheon Station offers various activities including water sports experience at the Central Park, thrilling rides at Wolmi Theme Park and more.

Seoul Forest brings nature into the city, and its location along the Hangang River makes the park a great recreational space for entertainment and cultural activities for the city dwellers. Seoul Forest is divided into four unique sections of Cultural Arts Park, Experience Learning Center, Ecological Park, and Ecological Wetland to meet the interests of diverse visitors. Main attractions of the forest include the Insect Garden, Butterfly Garden, and a splash fountain.

The shopping district where Korea’s trends start, Apgujeong Rodeo Street was formed when luxury brand boutiques began to open along the street. As one can guess, the street was named in reference to the Rodeo Drive in Beverly Hills, California, with aims to mirror the drive’s reputation of high-end fashion street in the 1980s. The street is lined with shops selling luxury goods, select items, and cosmetics. Across from the street is Galleria Department Store with its fancy exterior, where visitors can find brand collections.

【 Photo: Seolleung and Jeongneung in Seoul 】

Seolleung and Jeongneung are royal tombs of the kings and queen of the Joseon dynasty. Despite being a grave site, the area has a peaceful ambience that sets the mood for a pleasant stroll. Designated as UNESCO World Heritage in 2009, the area is surrounded by a lush pine forest and equipped with well-managed walking paths. Seolleung comprises two burial mounds each placed on a hill of its own, one for King Seongjong and the other for his consort Queen Jeonghyeon, separated by a jeongjagak (T-shaped wooden shrine). Located on the opposite side of Seolleung is Jeongneung, the royal tomb of King Jungjong, the the 11th king of the Joseon dynasty and the son King Seongjong. 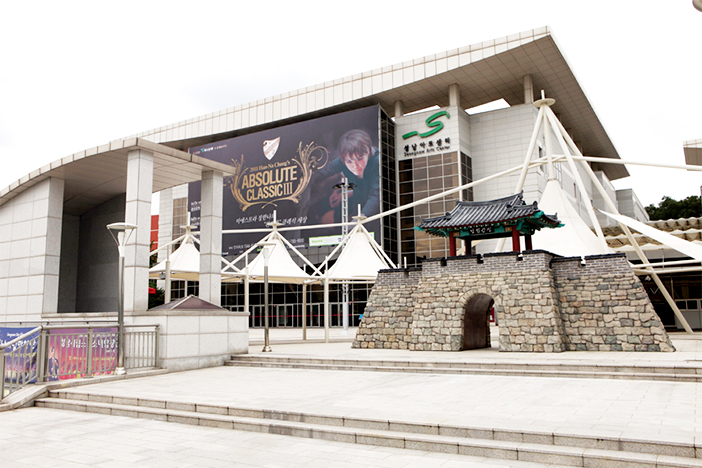 Seongnam Arts Center offers diverse cultural entertainment, mainly focusing on performance arts and art exhibitions. The art center has an opera house with 1,804 seats that holds large-scale operas, concerts, musicals, and ballet performances as well as an open-air performance stage and exhibition plaza. Other auditoriums include the two-story concert hall and a small ensemble theater hall with a T-shaped stage.

Crom Street is a memorial street dedicated to the late Korean singer and songwriter Shin Hae-chul. Referred to as “Crom” and “the Devil” by fans, Shin Hae-chul is considered one of the most iconic figures in Korea’s popular music industry and respected by music fans nationwide for his one of a kind music philosophy and style even to this day. The memorial street can be found along the music studio building used by Shin Hae-chul before his passing. The street is divided into sections that display memorial plaques, musical note blocks, and a statue of the late musician. Visitors can also enter his music studio, where it now serves as a memorial space displaying the musician’s personal belongings and albums, as well as notes left by fans who remember and miss him.

The Tomb of Min Yeong-hwan, a government official during the Joseon dynasty, is registered as a Gyeonggi-do Memorial Monument in honor of his patriotic deeds and service during his lifetime. The scenery of an old burial mound against the backdrop of modern-day apartment buildings seen from the hilltop behind the grave is an unusual sight even in Korea. The late official’s tombstone can be found near the entrance, engraved with an inscription handwritten by Syngman Rhee, Korea’s first president.

Yonginhyanggyo Confucian School was founded in 1400 as a part of the government’s regional education reform plan and to house the ancestral tablets of respected Confucian philosophers. This school was designated as a Gyeonggi-do Cultural Heritage for excellent preservation of customs and culture of mid-Joseon’s Confucianism. It still carries on the Confucian traditions even to this day by holding ritual ceremonies and serving as an education center, providing lessons on traditional etiquette, Chinese characters, brush calligraphy, and poem recitals.

NJP Art Center exhibits collections of works by the late contemporary artist Paik Nam-june. Paik Nam-june was recognized worldwide for his video art, which can be observed at this art museum founded in his honor. The building’s exterior is designed with mirror tiles, making the building seem like an artwork itself. The building comprises of exhibition halls, video collection room, and multi-purpose center that focus on works and films related to the late artist.

Gyeonggi Provincial Museum is dedicated to the research of Gyeonggi-do’s history and traditional culture and promoting Suwon Hwaseong Fortress. The museum is made up of three floors above ground with one basement floor and has seven exhibition halls along with a collection storage room, research room, and lecture room. The museum gives an overview of Korea’s history from the prehistoric age to the modern era through various artifacts, including the National Treasure Avatamsaka Sutra (The Flower Garland Sutra) and Treasure Cheontae sagyoui (Essentials of the Four Stages of Teaching in Tientai).

Korean Folk Village is Korea’s largest theme park that is designed based on traditional Korean villages and culture. This theme park has reproduced old traditional villages and lifestyles of Korea in the past, including that of Hamgyeong-do in the north and Jeju Island in the south. Many aspects of the architecture and household goods have been replicated in detail to make visitors feel as if they have traveled back in time to Korea’s Joseon period. In addition, several fun interactive programs and themed activities are prepared year round to entertain visitors. 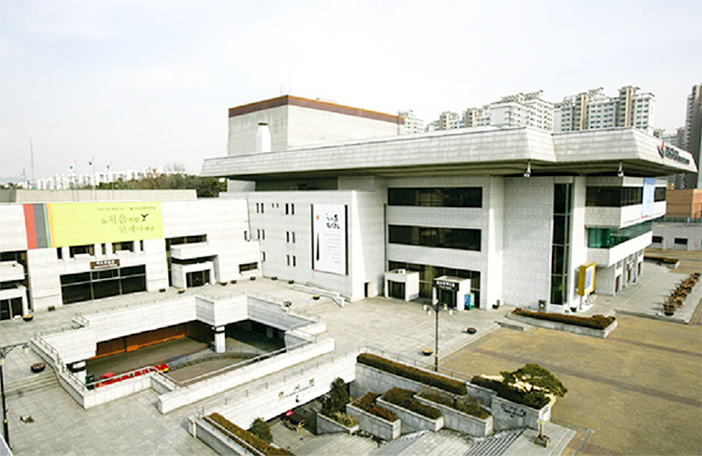 KBS Suwon Center is Korea Broadcasting Company’s media production building complex made up of a production center, television studios, and indoor and outdoor filming studios. Other related facilities such as editing, make-up, costume, and rehearsal rooms are also available so that filming and production of dramas, films, and commercials can all take place within the complex. KBS Suwon Center offers guided tours to those who are interested in behind the scenes of filming and production. Advance reservation is required for the tour; take note the reservations and tour are only available in Korean.

Hyowon Park is designed with a theme of filial piety, or Confucian teaching of one’s act of respect towards their parents. Follow the park’s main walking path and statues expressing filial piety can be found along the way. Besides the statues, Hyowon Park also has Jeju Street and Wolhwawon Garden. Jeju Street, as the name implies, is designed to focus on Jeju Island’s iconic symbols like dol hareubang (grandfather stone statue) and haenyeo (female divers), while the Wolhwawon Garden is inspired by traditional Chinese gardens. 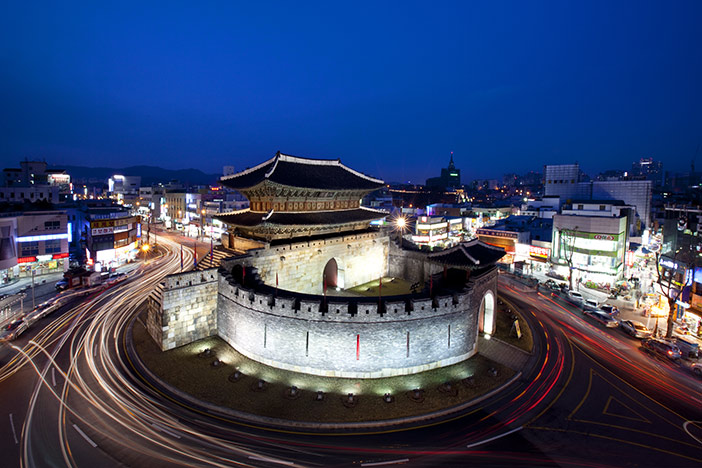 Paldalmun Gate, a registered Treasure, is the south gate of Suwon Hwaseong Fortress that was built in 1794. Paldalmun Gate was named with the meaning “leads to all directions,” as it was the main gateway into the city. The outer section of the gate is attached to a crescent-shaped stonewall called ongseong that was built to protect the gate. Paldalmun Gate’s ongseong is considered unique for placing its entrance at the center of the wall’s arch, unlike most ongseong walls that have their entrance in the corner.

A temporary palace, referred as haenggung in Korean, is a palace outside the capital city where kings would reside for a vacation, stop by during long trips, or take shelter during times of war. The Temporary Palace at Hwaseong Fortress was built for King Jeongjo to stop by and take shelter during his trips to his father’s tomb, Hyeongnyungwon. This palace is recognized to be one of the best temporary palaces among those from the Joseon period for its grand design and purpose.

Near Paldalmun Gate is an alleyway clustered with small and large fried chicken restaurants known as the Suwon Chicken Street. The history of this street dates back to the 1970s when a restaurant made a breakthrough by selling fried chicken, which then led to the spread of similar restaurants opening up within the area. The term “Suwon Wang Galbi (premium ribs) Chicken,” a menu that originated from this street, became a brand of its own after being heavily featured in the major hit Korean film “Extreme Job (2019),” attracting more visitors to the area.

Located west of Siheung in Gyeonggi-do, Oido Island is a great ecotourism attraction with various migratory birds and large mud flats. Found along the beach side, the Red Lighthouse and the Tree of Life Observatory are attractions not to be missed. Tour activities such as mud flats experience, cruise, and sea fishing are available.

Central Park is located among high-risers. The park is the first ocean-water park in the nation with the size of approximately 56 soccer fields. Visitors can enjoy water sports such as kayaking, boat rides and water taxi as well as visit Songdo Hanok Village nearby to see the balance of traditional and modern architecture.

Wolmi Culture Street offers various performances and events as well as a ride on the Wolmi Sea Train on an elevated railway. There are many restaurants along the beachfront and Incheon’s landmark Wolmi Theme Park, where visitors can enjoy rides while taking in the ocean view.

Incheon Chinatown provides a chance for visitors to experience traditional Chinese culture in Korea. Incheon Chinatown formed with the opening of Incheon Port in 1883, which brought in many merchants and traders from China. Today, the area is filled with many Chinese restaurants and shops.

This page was last updated on August 25, 2021, and therefore information may differ from what is presented here.

PERFECT FOR YOU! view
view all
##
Like itFavorites top