No tour through Jeollanam-do is complete without stopping in the cities of Yeosu and Suncheon. Yeosu, the host city of the World Expo in 2012, is a beautiful city that shows the balance of nature and architecture. Visitors to Yeosu can enjoy deep blue ocean views during the day and a fantastic nightscape after sunset. The nearby city of Suncheon, Korea's center of ecology, was designated by UNESCO in 2018 as a biosphere reserve and in 2021, Suncheon Getbol (tidal flats) was designated as a UNESCO Natural Heritage Site. Follow this guide on a course full of fabulous nightscapes and sights of beautiful nature in Yeosu and Suncheon.

* Some attractions subject to closure or limited entrance due to COVID-19. Please check before visiting. 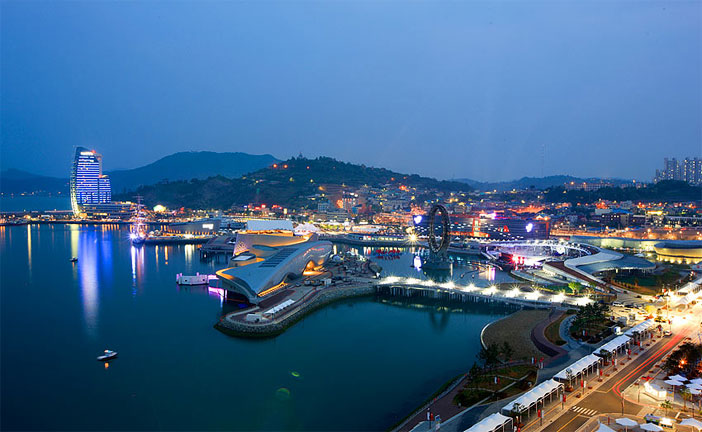 The first thing you will see when exiting Yeosu-Expo Station is the grand-scale Expo Ocean Park right on the coast. The site opened as the venue for the 2012 Yeosu World Expo, and now serves as an exhibition and event site that offers various water sports.

Of the park’s many facilities, the two that stand out the most are the Big-O and Sky Tower, which was originally a storage space for cement. The exterior of Sky Tower is accented by a gigantic pipe organ, which was included in the Guinness World Records in 2011 as the world’s loudest pipe organ. The observatory offers a panoramic view of Expo Ocean Park and the deep blue ocean fading into the horizon beyond.

The Big-O is one of the park's finest attractions. At night, the light and water show turns this large ring into a fantastic performance. Take note that the Big-O show does not take place on Mondays or during the winter season. 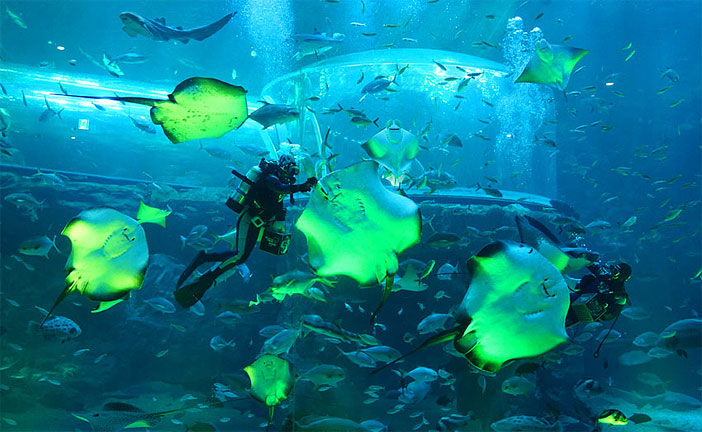 Hanhwa Aqua Planet Yeosu, located inside Expo Ocean Park, is a must-see attraction among tourists. Here you can see rare beluga whales, Baikal seals, loggerhead sea turtles, African penguins and more. There are also feeding programs for various animals, from raccoons and penguins to seals, piranhas, beluga whales, and many more. The highlight is the feeding program in the main tank, home to over 3,000 animals in over 280 species, where a diver feeds large rays by hand. 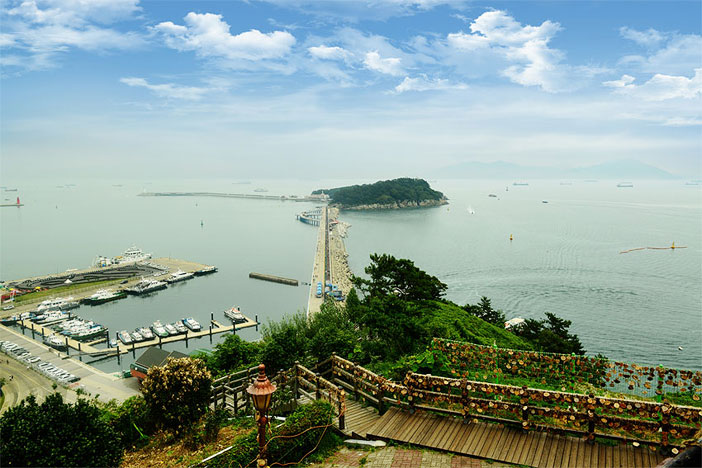 Odongdo Island is Yeosu's most representative tourist attraction. The island itself is quite small, but has much to offer, including over 190 rare species of trees and unique cliffs with amazing views of the ocean. The whole island is dotted with camellia trees, enough so that the whole island can be called a camellia forest. The flowers peak in mid to late March, just in time for the annual Camellia Flower Festival.

Despite being an island, visitors can walk there via a 768-meter breakwater that connects Odongdo Island with the mainland. The Camellia Train is also available for visitors to ride to the island for a small fee. The island offers many different attractions, including a musical fountain at the main plaza; a barefoot walking path great for acupressure; and the 25-meter tall Odongdo Lighthouse at the summit, with an observation deck inside. 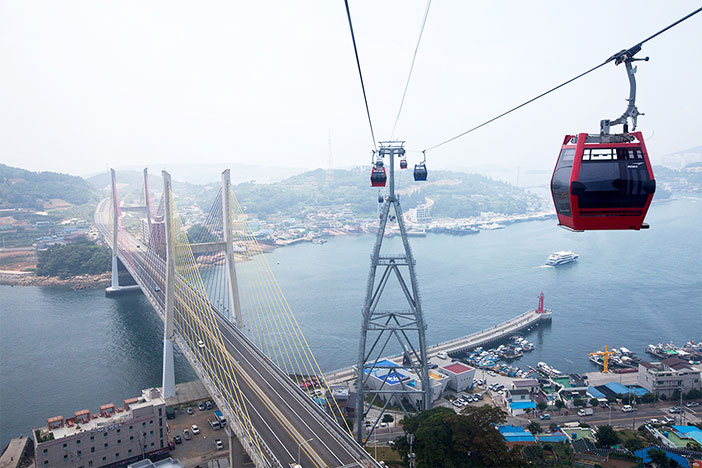 Yeosu Maritime Cable Car stretches 1.5 kilometers over the open sea from Jasan Park on the mainland to Dolsan Park, on a nearby island. Moving at a speed of 5 kilometers per hour, a one-way trip takes about 13 minutes and a round-trip journey takes 25 minutes. With boarding stations at both Jasan Park (Haeya Platform) and Dolsan Park (Nora Platform), travelers can pick the nearest location for convenience. For those coming from Odongdo Island, departing from Haeya Platform in Jasan Park is recommended.

The cable cars are divided into regular cabins and special Crystal Cabins, which have a see-through floor. If you're brave enough, look directly down to see nothing between your feet and the ocean far below. Operations run until evening, so visitors are recommended to go at night for fantastic views of the Yeosu nightscape. 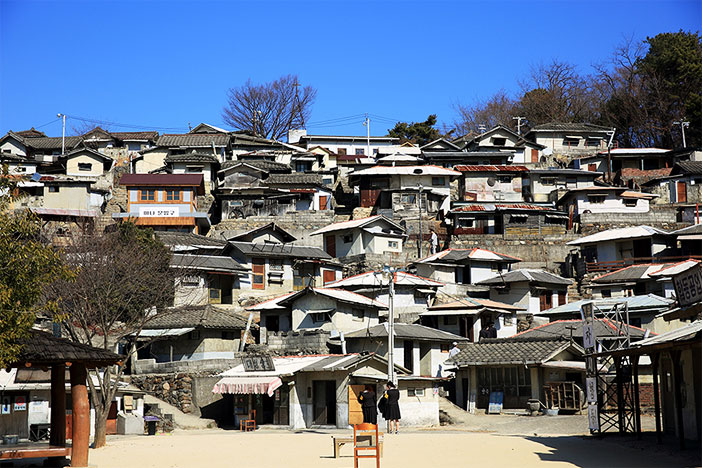 Suncheon Open Film Location opened in February of 2006 at the site of a previous military base. The set embodies the Daldongnae neighborhood in Gwanak-gu, Seoul from the 1960s to the 1980s. It has been used as the filming location of over 700 Korean television programs and movies, from dramas such as "East of Eden (2008)" and "King of Baking, Kim Takgu (2010)" to variety program "Running Man" and movies "A Werewolf Boy (2012)" and "Love, Lies (2015)." 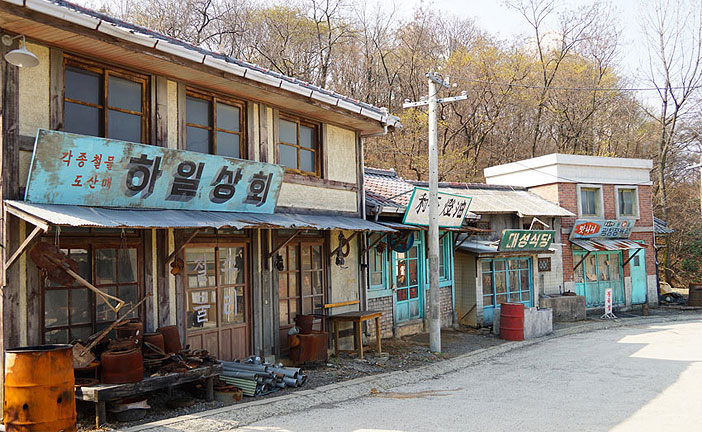 Suncheon Open Film Location is popular among visitors of all ages, as for Koreans born before the ‘70s it is a nostalgic location, and for younger visitors a chance to experience life from the ‘60s to the ‘80s. The most popular experience is by far the chance to wear school uniforms of the past. For just 3,000 won, you can rent an old school uniform for one hour and take photos throughout the set, starring in your own photo story. 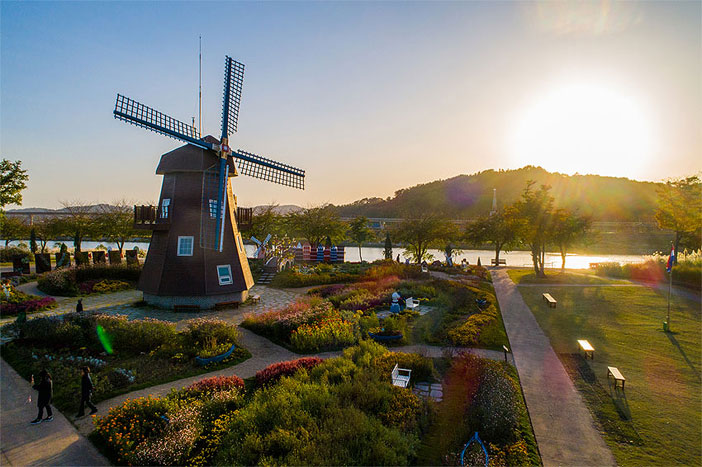 Suncheonman Bay National Garden is the largest artificial garden in Korea. In spring, the vast fields of tulips and golden canola blossoms draw in tourists. People also flock to the garden and the bay for the annual Suncheonman Bay Reeds Festival held in late autumn each year. The garden has two entrances; near the east gate is Suncheon Lake Garden and World Garden. By the west gate are Korean Traditional Garden and Suncheon Bay International Wetland Center. 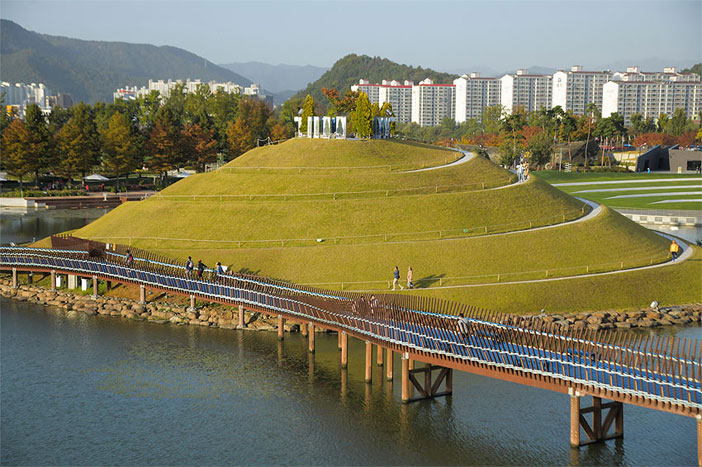 Suncheon Lake Garden is characterized by a landscape of small hills around a lake. Set off on a world tour by visiting Thailand, Japan, England, the Netherlands, France, China and more through the various countries' traditional gardens in the World Garden section of the park. The garden is extremely large, and would require a few hours in order to see everything. To keep your trip on schedule, it is recommended to pick up a free map from the ticket booth and follow one of the set courses. 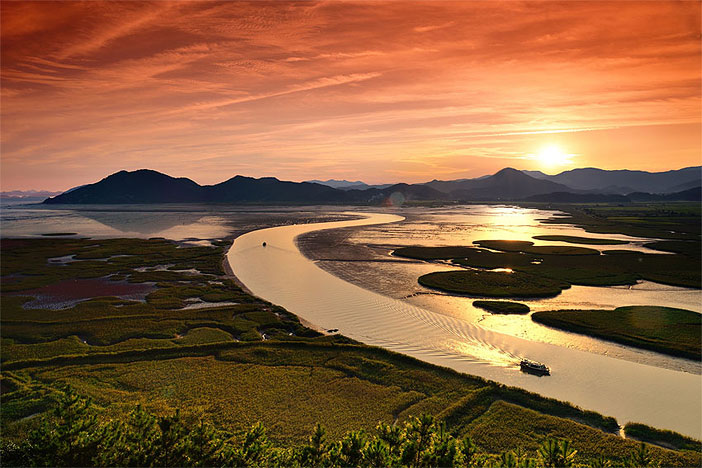 Suncheonman Bay is a coastal wetland on the southern coast, home to fields of reeds and colonies of seablite. The Suncheonman Bay Wetland Reserve is home to over 200 species of birds, including 11 rare species like the hooded crane and the black-headed stork. Due to the reserve's high biological value, it was included in the Ramsar list of protected wetlands in 2006 and in 2021, it was designated as a UNESCO Natural Heritage Site. 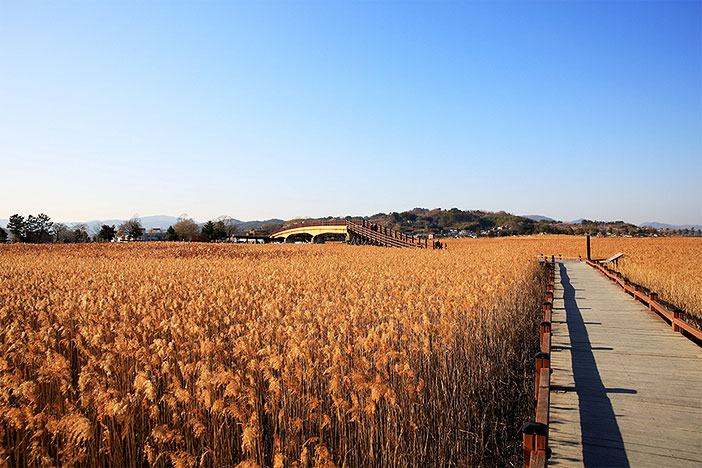 【 Photo: Wooden deck through the field of reeds 】

A walk through the vast field of reeds is beautiful, but for a more magnificent view, you will need to hike up a small hill. Following the boardwalk, you will reach the starting point of the 1-kilometer path up to Yongsan Observatory, where you can see a panoramic view of Suncheonman Bay below.

Unfortunately, due to limited time, the following attractions could not fit into this two-day tour. For visitors with more time on their schedule, these locations are highly recommended for a longer tour of Jeollanam-do. 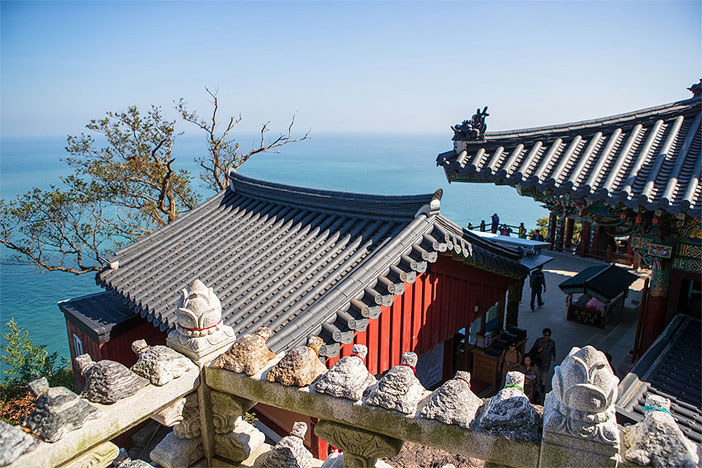 Hyangiram Hermitage is a small temple on the coast of the southern sea. Founded around 1400 years ago during the Baekje era, the view of the sunrise is particularly beautiful and many tourists visit on New Year's eve to catch the first sunrise during the Yeosu Hyangiram Sunrise Festival.

There are seven stone caves along the path to the hermitage, and it is said that if you pass all of these caves, your wish will come true. Visitors also stack coins or small rocks atop larger stones in the area of the main temple hall in order to make their wishes come true. 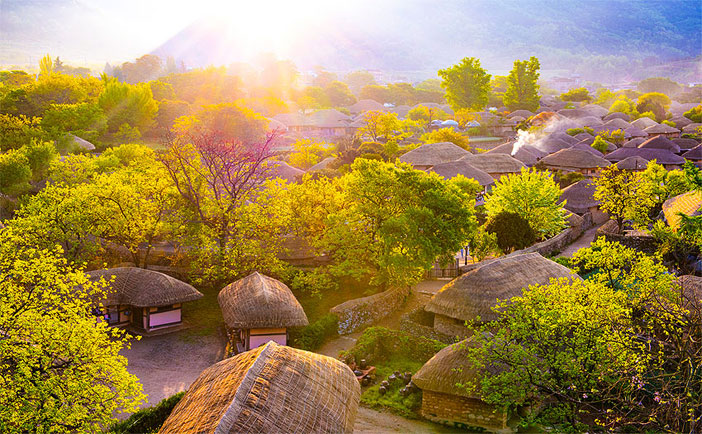 The town of Naganeupseong Walled Town is densely packed with thatch-roofed houses and preserves the traditions of Korea even to this day. Town fortresses or eupseongs served as both the center of local administration and protection for the villagers. Naganeupseong Walled Town is one of the most complete and well-preserved fortified towns from the Joseon dynasty. Visitors can browse the Dae Jang Geum film set, gift shops and traditional craft shops throughout the village. Programs include learning about the gayageum (traditional instrument) and traditional prison punishments. The Deep-rooted Tree Museum is located nearby and displays pottery and folk art from the Bronze Age to after the Korean liberation.

This page was last updated on September 29, 2021, and therefore information may differ from what is presented here. We advise you to check details before visiting.
LIST
PERFECT FOR YOU! view
view all
Make an inquiryff