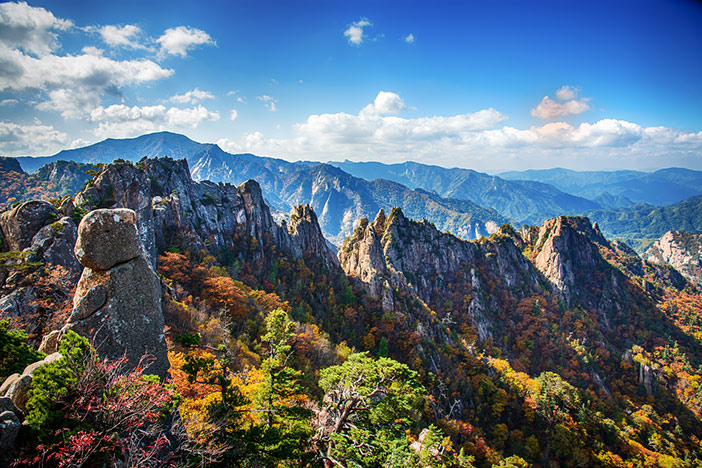 Located east of Seoul, Gangwon-do is a charming region, filled with the beauty of nature. Popular destinations include Chuncheon, a city with many lakes; Sokcho, where you can enjoy delicious foods one after another; and Gangneung, full of various experiences and fantastic sights to see. Gangwon-do has also received much attention due to the 2018 Olympic Winter Games that were held in Pyeongchang and other regions of Gangwon-do.

Enjoy both the mountains and the sea, and experience a new and unique landscape with the changing of the seasons! As Gangwon-do is a destination with so many sights to see and things to try, we recommend taking at least 3 days to travel around the region.

Namiseom Island was originally not an island, but took its current form when it became surrounded by water with the building of Cheongpyeong Dam to the south. The name of the island comes from the army general Nami, who was buried here during the Joseon Dynasty.

The entire island can be deemed as a giant photo zone for its exquisite beauty and attractions that offer plenty of photo opportunities. The two must-see attractions when visiting Namiseom Island are definitely the Metasequoia Lane and Songpa Ginkgo Tree Lane. These two trails often appear in movies, dramas, and advertisements. In particular, the island offers a fascinating scene in fall with leaves colored in shades of vibrant yellow, gold and orange. 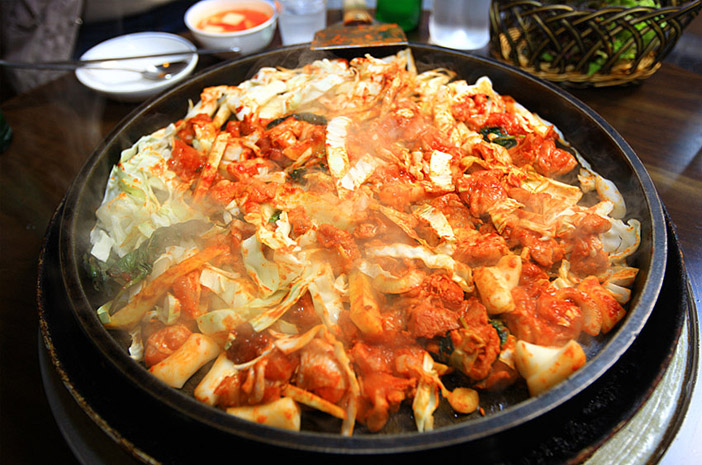 While exploring Namiseom Island, you may have felt your stomach begin to call for food. Head to Chuncheon to fulfill your needs! Chuncheon Myeongdong Dakgalbi Street is a famous alley filled with restaurants that have been serving the deliciously spicy dakgalbi (spicy stir-fried chicken) for over 50 years. Dakgalbi is a meal in and of itself, consisting of large chunks of chicken marinated in a spicy sauce and stir-fried with cabbage, sweet potato, tteok (rice cake) and more. Don’t forget to order fried rice afterwards, if you aren’t too full, that is! 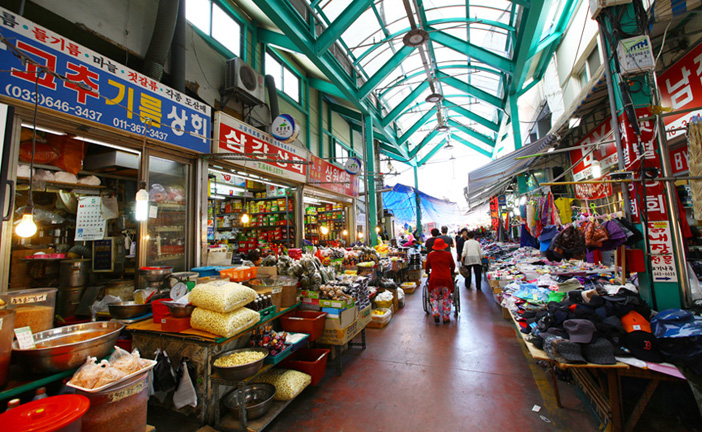 Chuncheon Romantic Market is the city’s representative permanent market, filled with romance and lifestyle of the local people. Originally called Chuncheon Jungang Market, the name changed in 2010, followed by a renovation to keep up with the new name. Each shop in the market was given a drawing to showcase the shop’s particular and unique traits that were cultivated over 30-50 years of business. Every street of the market is filled with murals and sculptures that serve as a perfect backdrop for taking photos.

Seorak Waterpia is a four-season water theme park using natural spring water in both spa and water leisure areas. The park is open year round but is especially popular in summer, when many tourists come to visit the East Sea. Enjoy the beauty of Seoraksan Mountain as you soak in the spa, or enjoy water activities with your families and friends.

Seoraksan Mountain, Korea’s most representative mountain, is located in the northeastern part of Gangwon-do, stretching over the cities and counties of Sokcho, Yangyang, Goseong and Inje. The mountain range is so vast and magnificent that it is separated into Inner Seorak to the west and Outer Seorak to the east, with the dividing point being the highest peak, Daecheongbong Peak.

Many visitors to Seoraksan National Park depart from the nearby Sokcho, hiking on courses to Ulsanbawi Rock, Gwongeumseong Fortress and Biryongpokpo Falls. The difficulty and time required vary by each course, with most beginners choosing the Gwongeumseong Fortress course. This course is unique from the others in the fact that you can take the Seorak Cable Car to the top and hike down for an easier way to experience the beautiful mountain views.

One of the closest attractions to Seoraksan National Park is Daepohang Port, a major fishing harbor on the East Sea. Rather than large fishing boats, the harbor and sea are filled with small boats operated by individual fishermen. The catch of the day is sold in a market stretching from the entrance to the water’s edge. Walking and looking around the vendors can be fun, but the biggest enjoyment of the market is to eat! From fried squid and shrimp to fresh hoe (sliced raw fish), the options are unlimited. Take the opportunity to pick the seafood you like and enjoy!

Abai Village is one of Sokcho’s top attractions. Abai means grandfather in the dialect of Hamgyeong-do, a region in the northeastern part of the Korean peninsula. The village was founded in 1950 by refugees of the Korean War who settled here and the name of “Grandfather Village” came later. The village is only 50 meters away from Sokcho’s mainland and is accessible by taking the Abai Village Ferry from downtown. The first thing to do after arriving in Abai Village is to take a look around! Murals scattered throughout the village make great backgrounds for souvenir photos.

Take in the beauty of one of Gangwon-do’s eight scenic views of the East Sea at Naksansa Temple, built by Uisang (AD 625–702), a Buddhist Master during the Unified Silla Dynasty. The temple houses many treasures to enjoy, including a grand Avalokitesvara Bodhisattva statue and Kwanseum Bodhisattva statue at Hongryeonam Hermitage. The surrounding view is outstanding, attracting many Korean artists to attempt to reproduce this scene in both writing and images.

Sun Cruise Resort is perched on the cliff above Jeongdongjin Beach. The resort is famous for its cruise ship-shaped architecture and was selected on CNN’s list of Korea’s most unique accommodations in 2014. The night view is beautiful, but the sun rising over the ocean is also a sight not to be missed.

Sun Cruise Resort provides wonderful accommodations, but even if you don’t spend the night here, the Sun Cruise Theme Park is open to outside visitors. Take photos with “The Hands of Blessing” and other works of art in the Jeongdongjin Sculpture Garden. Visitors can also take a relaxing stroll along the grass field or feel like walking on water by stepping out directly over the ocean at the Glass Observatory.

11:30 AM, Relax at Jeongdongjin Beach or Gangneung Coffee Street 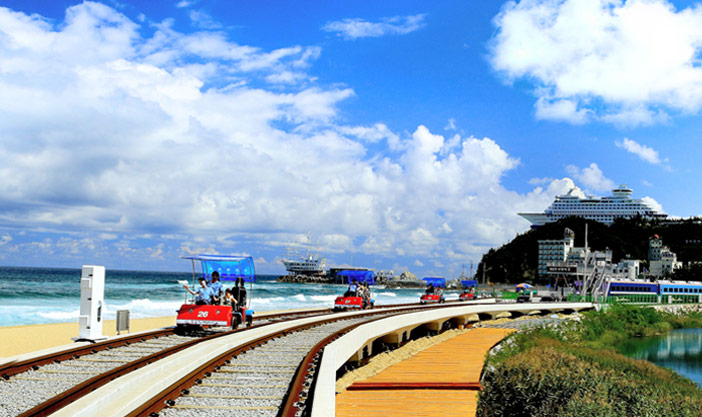 Jeongdongjin gets its name from being exactly due east (‘jeongdong’ in Korean) of Gwanghwamun Gate in Seoul. Enjoy the coast as you ride along on Jeongdongjin Rail Bike, departing from the train station closest to the ocean in the world. This is a popular activity especially in spring as the weather is perfect. The rail bike may not operate on extreme cold days during winter due to safety reasons.

For a cup of coffee while gazing out at the blue ocean, head to Anmok Beach. Once a street with a single vending machine, Gangneung Coffee Street is now lined with coffee shops that formed over the years. From individually operated local shops to chain cafés, visitors have a vast pool to choose from. Buy your coffee and take a moment to enjoy the harmony of the energizing drink and the calming view of the waves crashing to the shore.

Ojukheon House gets its name from the black bamboo trees that surround the building. Ojukheon was home to Shin Saimdang (1504-1551), Korea’s most noteworthy mother figure and female artist, and the birthplace of her son Yi I (1536-1584), also known as his penname Yulgok, one of the most prominent Confucian scholars of the Joseon Dynasty. Shin Saimdang and Yi I are both important historical figures of Korea and features on 50,000 won and 5,000 won bills, respectively.

Next on the tour is Seongyojang House, located near Ojukheon House. Seongyojang House is a representative traditional hanok of the upper class. The main house is the largest of all remaining traditional houses, with a size of 102 kan (unit for space between two pillars). Considering the fact that the building regulations during the time this house was built restricted all houses to be 99 kan or less, this building is truly exceptional. The lush pine tree forest behind the house that kept its place for hundreds of years creates an elegant and refined backdrop to the charming beauty of this traditional destination.

This page was last updated on April 11, 2019, and therefore information may differ from what is presented here. We advise you to check details before visiting.
LIST