Traditional teas have a myriad of health benefits, including the ability to either warm or cool one’s body. They also offer a special intangible something that eases our minds and brings people closer together. It’s no wonder that the unique taste and characteristics of Korean tea are causing tea drinkers worldwide to sit up and take notice. 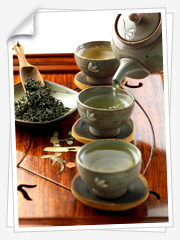 As one of the most popular teas in Korea, green tea has firmly established itself at the forefront of the well-being boom of the 21st century.

The effects of green tea are well-known to the public. Green tea’s somewhat bitter taste comes from an abundance of catechins, which are believed to help fight against cancer and bacteria, reduce body fat, and lower cholesterol and blood pressure. Green tea is also known to contain vitamins that are good for your skin.

The taste of green tea varies, depending on the temperature of the water. Green tea is best served after being steeped in waters reaching temperatures of 60-70°C. Preparing your tea in a proper tea set also makes the green tea experience just that much more enjoyable.

Traditional teas go beyond just having exquisite taste; they also help prevent a number of common ailments. Long ago, the Korean people were able to skillfully decipher the specific effects of each tea, allowing them to incorporate tea as part of a lifetime of healthy living. 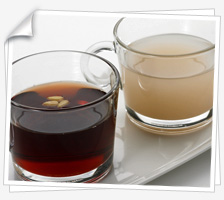 Sikhye and Sujeonggwa are main traditional drinks, especially made and served on national holidays or special occasions. In olden days, families used to sit together and drink cold Sikhye or Sujeonggwa during the wintertime. Nowadays, both beverages are sold in cans or bottles in grocery stores year-round.

Made of sweet rice and malt, Sikhye has a sweet and smooth taste. Made of ginger, cinnamon, and dried persimmon, Sujeonggwa tastes sweet, but spicy. Both drinks are frequently served as a dessert in Korean restaurants, helping to aid digestion.