Legend has it that the famous Chinese monarch Qin Shi Huang regularly ate ginseng, in hopes of gaining eternal life. During the Joseon Dynasty, King Yeongjo, who lived to be 83, also made ginseng a regular part of his diet. The trend continues today as everyone from movie and sports stars, like Choi Ji-Woo and Chan-Ho Park, turn to ginseng to try to maintain a healthy lifestyle.

Ginseng is a root whose shape resembles a human body and is highly esteemed in both the East and West. Korean ginseng (called Panax Ginseng) in particular is known worldwide for its amazing health benefits. Korea is said to be the best place to grow ginseng because the country has four distinct seasons, proper temperatures, excellent soil, and an adequate amount of annual rainfall.

It is true that many other countries also grow ginseng, but panax ginseng is of better quality and has more health benefits than ginseng grown in the United States, Japan, or China because it contains more saponins.

Effects of Saponin and Ginseng 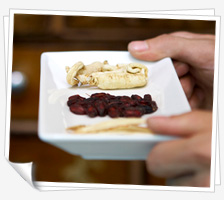 Although ginseng contains plenty of amino acids, vitamins, and minerals, its health benefits cannot fully be explained without saponins. The saponins in ginseng are usually referred to as ‘ginsenosides’ in order to differentiate them from the saponins found in other vegetables such as garlic, onion, and bellflowers.

Why Is Six the ‘Magic Number?’

Ginseng reaches maturity in its sixth year. Saponins, which begin to grow during ginseng’s third year, reach their maximum during the sixth year. The quality of the ginseng plummets after year seven, as the root develops a rough surface and stops growing.

Giseng is called a variety of names depending on how it’s processed.

Ginseng produces a number of new nutrients as it goes through the steaming and drying process. These new nutrients are present only in Hongsam and are elements that are believed to slow down the aging process and prevent cancer and obesity.

Susam consists of more than 75% water, making it vulnerable to mold. It needs to be wrapped with newspaper or plastic bags and refrigerated. Once it is out of the refrigerator, it must be used immediately.

Baeksam can be stored up to one year if stored in a place without a lot of moisture. Vacuum-packed baeksam can last up to three years.

Vacuum-packed hongsam can be stored for more than ten years. 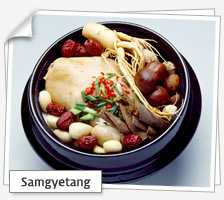 The most well-known ginseng dish is samgyetang (Korean chicken and ginseng soup). It has an abundance of nutrients and is known to increase stamina. Samgyetang is cooked with ginseng, sweet rice, chestnuts, jujubes and more. Ginseng can also be used for making sweet insamjeong (ginseng preserved with sugar and honey) and tasty fried ginseng. Ginseng juice mixed with milk and honey is another delicious way to enjoy this incredible root.