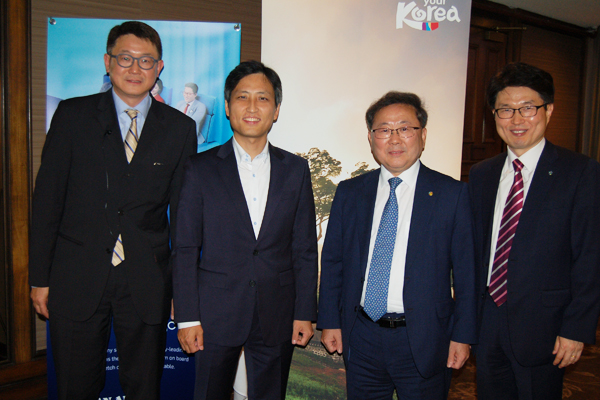 A recent visit by tourism authorities from Jeju Island to Vancouver marks the first step in efforts to establish a tourism relationship between Canada and the popular Korean holiday island.

The “Hot Summer’s Night In Jeju” mission was led by Hong-Bai Park, president of the Jeju Tourism Organization. Through an interpreter, he told assembled tour operators and travel agents that “we look forward for your full support.”

Some 1.2 million international visitors came to Jeju Island last year, and it is a favourite destination in Asia. About half of those international visitors came from China, with 54.4% of the total, said Ian Rhee, general manager of the overseas marketing department for the Jeju Tourism Organization. There is an increase in number of tourists from countries like Japan, Malaysia, Thailand, Taiwan, Hong Kong and others, he said.

North America as a source market is much smaller, with just 31,270 coming from the US (about 2.6%) to Jeju last year, and no exact figures available for Canada, said Rhee.

The island has been dubbed “the Hawaii of Korea,” but Jeju has distinct seasons, including a winter that brings cool weather, unlike tropical Hawaii. But like Hawaii, there are numerous beaches that ring the island, and these become very popular in the spring and summer, when the temperatures climb to reach the mid to high 20 degrees C.

Meanwhile, the interior of the island is defined by many small “parasitic” volcanoes that have been created around the large, dormant Mt. Hallasan, the highest mountain in South Korea. There are 368 of these parasitic volcanoes, helping to give Jeju its designations as a UNESCO Global Geopark and UNESCO Biosphere Reserve and World Heritage site. Hiking in this landscape is a popular pastime, and there many trails that can be walked, that are not physically demanding, he said.

There is also a great selection of hotels on Jeju, including a premium-level favourite called the Haevichi. It is a five-star resort located near to the idyllic beaches of the Pyoseon district, and about 18 km from the scenic Seongsan Ilchulbong coastal mountain. Some rooms offer views of the sea while others overlook Halla Mountain.

Leisure facilities include a sundeck, an indoor heated swimming pool, a golf course and a fitness centre/gym. A daily buffet breakfast is offered, and the rooms have kitchenettes with dishwasher and fridge.

Korean Air is a favourite way to enter Korea and it operates daily flights to Incheon, Seoul from Vancouver both summer and winter, and daily flights from Toronto in the summer, plus five times per week in the winter. A B787 Dreamliner is used on both the Toronto and Vancouver routes.

The economy class seats on these aircraft can be described as “semi-premium economy” seats, says Douglas Yiu, sales manager for Korean Air in Vancouver. He notes that the seats in the Korean Air economy class cabin have a pitch (defining legroom) of 34 inches, which compares well with a typical pitch of between 30 to 33 inches by competitors, he said. A typical premium economy pitch is 38 inches.

Also, seat width is a roomier 18 inches verses a typical width of 17 inches – and a premium economy seat width of 19 inches, said Yiu.