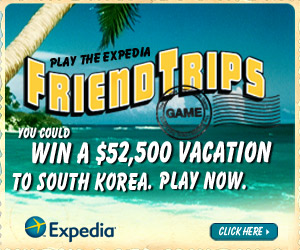 A luxury vacation to South Korea for six lucky friends is among over a million dollars’ worth of travel prizes that Expedia.com, the world’s leading online travel agency, is awarding to Facebook friends. The Expedia® Friendtrips™ Game is the largest sweepstakes ever hosted on Facebook. The game began today and will run for six weeks. At the game’s conclusion, a vacation to South Korea valued up to $52,000 will be awarded to a winning entrant and five friends.

To play, prospective world travelers merely need to become a fan of Expedia’s on Facebook at www.facebook.com/expedia. They will then create a “virtual plane” and can point that plane towards one of a series of vacation destinations. They will populate the plane with five of their Facebook friends, each of whom simply needs to “fan” Expedia to join. The friends are entered to win once they accept the invitation. They can also create planes of their own.

“This is not only the largest sweepstakes ever hosted on Facebook, it is the largest promotion in Expedia’s history, by a wide margin,” said Scott Durchslag, president, Expedia Worldwide. “The contest and the prizes may be grand and extraordinary, but our rationale for doing this is pretty simple: We want to say thanks. Millions of travelers rely on Expedia to help them book the perfect vacation. They’ve helped us become the world's largest online travel agency. And we are grateful for our customers’ loyalty and friendship.”

Should a group of six friends win the trip to South Korea, an extraordinary vacation awaits. They will experience the history and innovation of South Korea with the help of an English-speaking guide for 5 nights and 6 days. From famous fortresses and temples, ancient artifacts in the tombs of kings, and to Andong Hahoe Village, a UNESCO World Heritage site and more will truly enlighten and inspire them.

In addition to South Korea, winners will have the chance to win luxury trips to a wide array of vacation destinations in around the world. Vacation destinations include extended tours through South America on LAN and through Europe on Norwegian Cruise Line’s Jade, Australia, Bermuda, Banff Lake Louise in Canada, France, Las Vegas, Villa La Estancia Riviera Nayarit in Mexico, New York, South Africa, Buccament Bay Resort on St. Vincent in St. Vincent & the Grenadines or Tahiti.