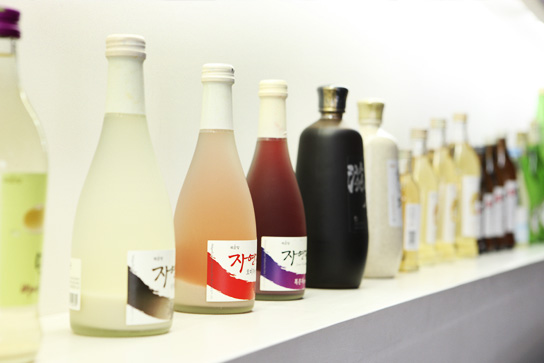 For Koreans, alcohol is a lifelong companion in times of sorrow and joy. Korean people have enjoyed making their own liquor from healthy ingredients since ancient times. Traditional liquor is often called yakju (약주), literally meaning “medicinal alcohol,” as light to moderate alcohol use is believed to have health benefits and is offered from one person to another as a way to cherish friendships.

Korea’s representative traditional liquors are makgeolli (막걸리), and soju(소주).  They can easily be purchased in marts and corner stores from Seoul to even the smallest of towns. Their low price also makes them quite popular. For those looking for more quality products, special local liquors such as Gyeongju Gyodong Beopju, Andong Soju, and Munbaeju are highly recommended. These locally produced liquors are made in the traditional method, bringing with them a deep favor and taste. The liquors are usually packaged in luxurious boxes, making them perfect gifts. These liquors can be purchased at specialty liquor shops, department stores or specialty stores in each region. 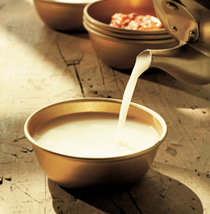 Of all of Korea’s traditional alcohols, makgeolli has the longest history. It is made by mixing steamed glutinous rice or wheat with nuruk, a fermentation starter culture, and water, and then leaving the mixture to ferment. It has a milky, opaque color and a low alcohol content of 6%-13%.  It is relatively low in calories and high in proteins. It also contains high levels of yeast and lactobacillus.

Idong Makgeolli, produced in Pocheon-si, Gyeonggi-do, has a sweet and tangy taste similar to carbonated water. Recently, different flavors of makgeolli have become quite popular, including yuja (citron), ginseng and omija makgeolli.

The method for making cheongju is similar to makgeolli; cheongju is the clear liquor remaining after straining makgeolli. Cheongju has been widely used in a variety of traditional rituals and rites of passage, as it is regarded as a sincere and well-prepared alcohol. Cheongju is not only clear ("cheong" means clear), but also favorable and easy to swallow.

Gyodong Beopju liquor is brewed in Gyeongju-si, Gyeongsangbuk-do.
Hansan Sogokju is a traditional liquor with 1,500 years of history, produced in the Hansan region of Seocheon-gun, Chungcheongnam-do.

Soju is the most popular liquor in Korea. The most common type is diluted soju, which is mass-produced by mixing water with spirits, a process different from the traditional method. The best known brands are Chamisul (참이슬) and Chum Churum (처음처럼). While all have the same soju base, locally produced alcohols are generally made using the traditional method of distillation and regarded as high quality products.

Leegangju is one of the finest liquors from Jeonju-si, Jeollabuk-do, made by mixing in pears and ginger. Munbaeju is a traditional liquor that has been made for generations in Pyeongan-do in North Korea. It is now also being produced in Seoul by a Korean Food Grand Master. 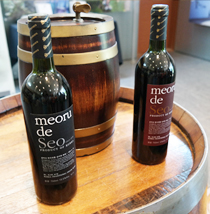 Gwasilju is the generic Korean term for fruit-based liquor. The method of making gwasilju can be divided into two categories; one is made from naturally fermented fruits and the other by mixing fruits and sugars with alcohol, making for a more fragrant, fruity flavor. Bokbunja, Maesilju, and Meoruju are the most common gwasilju found in supermarkets and department stores.