Memory of the World Register

Joseon Wangjo Sillok; The Annals of the Joseon Dynasty (Designated 1997) 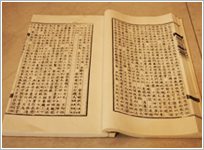 Joseon Wangjo Sillok, also known as the Annals of the Joseon Dynasty, is a chronological record of 25 kings' historical reigns, from the dynasty's founder King Taejo to King Cheoljong, over a span of 472 years (1392-1910). When a king died, the number of years the king had ruled the dynasty, as well as other everyday affairs that had occurred during his reign were recorded in a book, otherwise referred as the "annals." The Joseon Wangjo Sillok not only covers the historical and cultural aspects of the Joseon Dynasty but also important elements including politics and diplomacy, social systems, economics, and many more. Today, they are indispensable materials for the study of Korean history while providing diverse resources for the study of other East Asian countries.