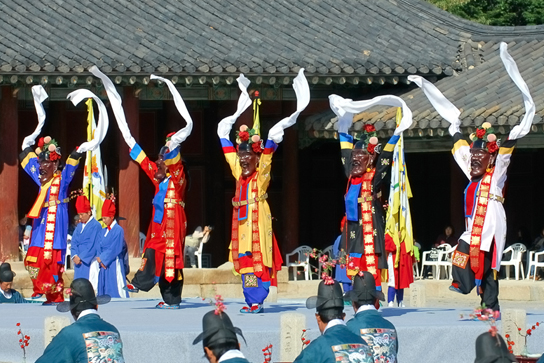 Cheoyongmu; Masked Dance Performance Based on the Legendary Tale of Cheoyong (Designated 2009)

Cheoyongmu is formerly used to dispel evil spirits and pray for tranquillity at royal banquets or during exorcism rites on New Year’s Eve to promote good fortune.

Cheoyongmu is based on the legendary tale of Cheoyong from the Silla dynasty. Cheoyong came up with his own number to chase the evil spirit away with his singing and dancing. From then on, people believed that putting a drawing of Cheoyong on the outside of their main gate would ward off sickness and a variety of evils. Later, it the simple ritual to ward off evil had transformed into a formal royal court dance. The dance is performed by five men clad in white, blue, black, red and yellow to represent the four cardinal directions and the centre.

The dancers move with stateliness and vigour through a variety of styles and tempos of music, punctuated by various lyrical song recitations.