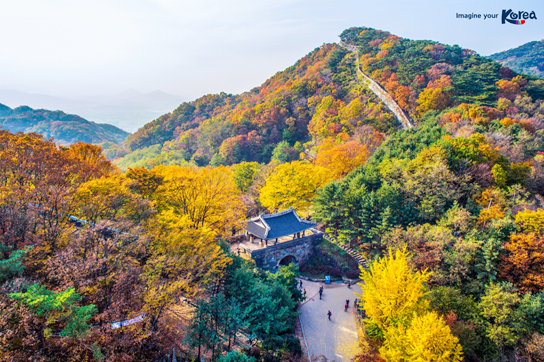 Sueojangdae (Defense Commander's Post) is a two-story wooden military facility used for observation deck which soldiers can watch enemy movements as well as for directing battles. Out of 4 posts erected, Sueojangdae is the only remaining structure and sits on the top of the highest Iljangsan Mountain in the fortress.

The Namhansanseong Fortress Defense Command was organized during the Manchu Invasion in 1636. King Injo himself helped to direct and encourage the troops from here, and they managed to hold out for 40 days against the Qing force.

Janggyeongsa Temple was built in 1683 and this is where the monks who were helping to build the fortress, stayed. This showed how the monks were dedicated to the works of the nation. The temple is the only place that was preserved out of the nine temples that were built by the Buddhist Army, also known as, Seunggun in Korean.

The Haenggung of Namhansanseong where the King temporarily stayed was constructed to serve as a shelter and an emergency capital city during wartimes. Unlike other palaces, it was a self-sufficient defensive fortress where the local administrative center was placed within the fortress together with jongmyo, a royal ancestral shrine and sajik, an altar. It holds a great value today as it allows one to closely examine the system of temporary palace during the Joseon era.

Sungryeoljeon Shrine was built in commemoration of the founder Baekje, King Onjo
(r. B.C. 18 ~ A.D.28). General Yi Seo who was in charge of the construction of Namhansanseong are enshrined together here, where sacrificial rites are held whenever there is a big event related to the fortress.