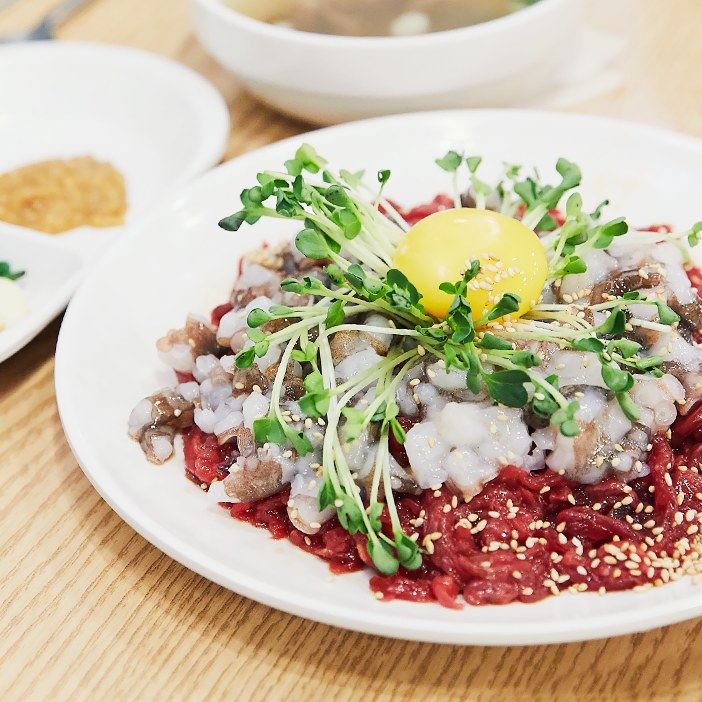 When it comes to the question of favorite Korean food among international visitors, the answers can be quite diverse, ranging from bibimbap to samgyeopsal, bulgogi, chicken, and Korean-style marinated beef ribs. However, when asked to name the least favorite, sannakji (small live octopus) almost always makes it in the top list. Sannakji is a delicacy enjoyed by many Koreans, often finely chopped and served raw under the name nakji tangtangi (live octopus). It’s been only a couple of years since nakji tangtangi began to gain spotlight through various media channels as an unusual dish that is worth a try; until then it was considered untasteful among foreigners. To those who fear nakji tantangi to this day, we present a dish that will lower the bar: yukhoe tangtangi (chopped live octopus and beef tartare)!

First, head to the Yukhoe Tangtangi Street inside Gwangjang Market, a must-visit traditional market in Seoul. Yukhoe Tangtangi Street is located along the market’s main alleyway in the direction of Jongno 5-ga Station (Seoul Subway Line 1), Exit 8. It’s one of the most crowded food street, so it’s hard to miss.
Next comes the ordering. Most restaurants separate the side menus from the meals. Side menus mainly consist of dishes that go well with alcoholic beverages, like yukhoe tangtangi, sannakji, and pajeon. In particular, yukhoe tangtangi is a combination of yukhoe and nakji tangtangii. A plate of yukhoe tangtangi costs around 30,000 won.
Before digging in, mix the egg yolk, sannakji, and yukhoe altogether. Yukhoe tangtangi usually comes in layers. The bottom layer is yukhoe with nakji tangtangi placed on top. Finally, a raw egg yolk is carefully set on the center over the nakji tangtangi. To properly enjoy yukhoe tangtangi, break the egg yolk with a chopstick before mixing all the ingredients together.
Once it’s all mixed, take a piece of laver and lay it on your palm. Take a bite-size portion of the mixed yukhoe tangtangi and place it on the laver. Then fold the laver to wrap the meat, making a ssam (vegetable wrap), into a size that fits into your mouth.
Finally, you are now ready to eat. The laver hides the meat, and those wriggling octopus legs are no longer a threat! If you're still too unnerved, close your eyes, place the laver ssam in your mouth, and munch. While it might take some time to get used to the unfamiliar texture, keep chewing and you’ll catch on to a savory taste not found anywhere else.
Helpful tip

Make your experience better!
The egg yolk adds a buttery taste to the meat, which may not be favorable to some. If the laver ssam doesn’t help neutralize the taste, try adding spicy toppings like hot pepper or minced garlic. Another option is to take a bite of hot pepper dipped in doenjang and it will clean out any buttery aftertaste. If the hot pepper doesn’t do the trick, then order a bottle of soju, yukhoe tangtangi’s perfect match, and enjoy the authentic local taste.