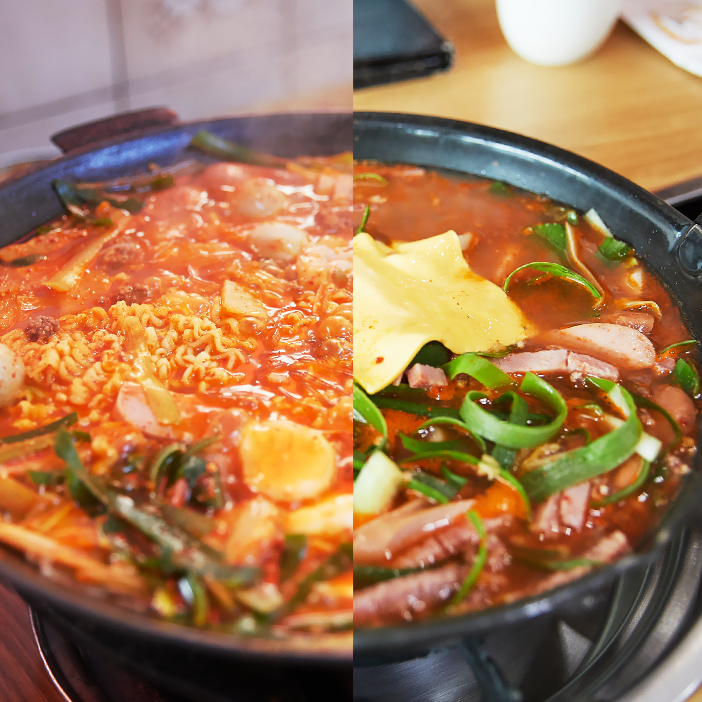 There are more traditional Korean stews available, but budaejjigae, made with ham and sausage, is easily the most liked stew among foreigners. The dish was invented after the Korean War, using the tinned meat products available around U.S. army bases. Today, there are two main types of budaejjigae, namely Uijeongbu budaejjigae and Songtan budaejjigae. Try them both and decide for yourself which is better!

Because Uijeongbu budaejjigae is very filling, be sure not order more than one serving per person. The average cost per person is 9,000 won. Uijeongbu budaejjigae is known for having a simple broth with a crisp and refreshing flavor. Despite the large amount of ham and sausage put into the budaejjigae, it does not feel greasy. This is thanks to the broth and using a less salty kimchi.
When the budaejjigae is bubbling away nicely, start by eating the ramyeon noodles first. The noodles lose flavor if they expand too much, and they can also get stuck to the bottom of the pot and start to burn. After the ramyeon, you’re free to enjoy the sausages and all the other filling ingredients, such as kimchi, tofu, and rice cakes, with your bowl of rice.
Refills of broth are available for free, so you can eat plenty. Before getting a refill, order a serving of modum sari (assorted sides), coming with all the best add-ins, like rice cakes, bacon, extra ham, and even mandu (dumpling). With this extra order, you’ll be stuffed to the brim before you leave the table.

Cost of budaejjigae
While the cost will vary by shop and region, on average, budaejjigae costs around 10,000 won per serving. An order of modum sari usually runs at around 5,000 won, so you can eat a hearty meal without hitting your wallet too hard.