Traveling around the Pristine Jeju Island 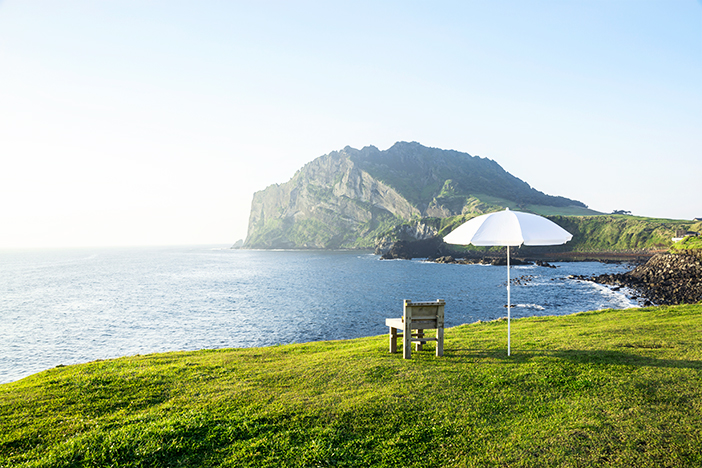 Seongsan Ilchulbong Peak, Manjanggul Cave, and Hallasan National Park are must-see sights. Additional attractions include forests, waterfalls, and volcanic cones. With so many beautiful things to see, it can be hard to know where you should plan your trip. Following our guide, you can enjoy a stress-free, relaxing retreat, no matter which part of Jeju you choose to visit. 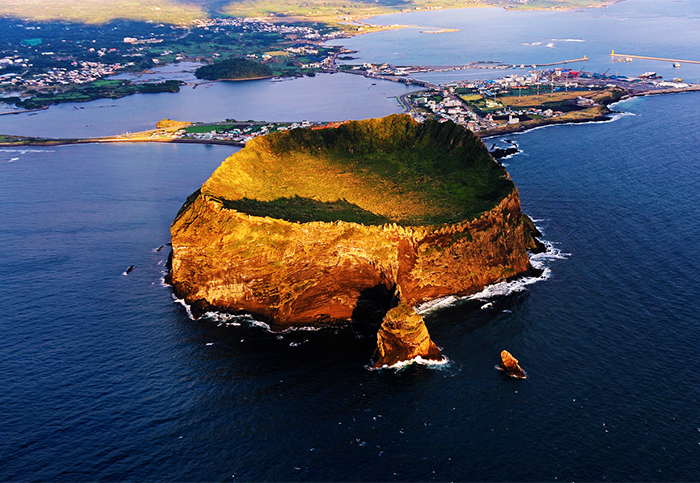 Seongsan Ilchulbong Peak, a landmark attraction of Jeju, was formed from a volcano that erupted about 5,000 years ago from the ocean floor. The peak is especially famous as a viewing spot for the sunrise, known to be one of the top ten exquisite sceneries of Jeju Island.

Besides viewing the sunrise, Seongsan Ilchulbong Peak is also known to be an excellent trekking spot. The Seongsan-Ojo Trail connects two villages by crossing the peak. Another popular trail, the Jijil Trail, offers a closer look at the world heritage site as well as Jeju’s local culture. This trail is easy even for beginner trekkers. A unique performance stage is also prepared at Seongsan Ilchulbong Peak where haenyeo (female divers) hold special performances related to diving.

Feel the breeze at Seopjikoji 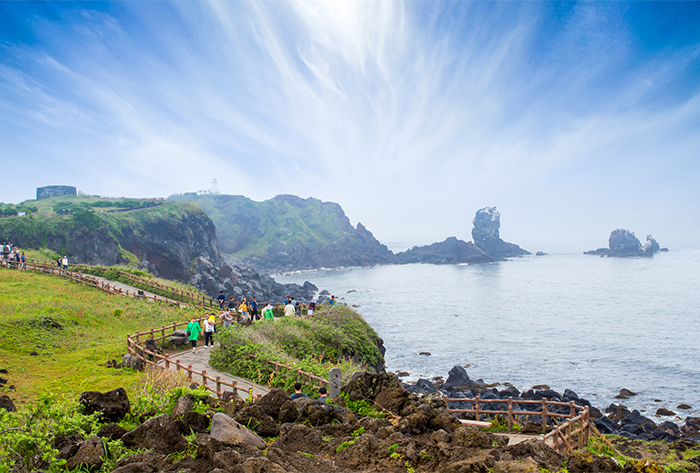 A short drive from Seongsan Ilchulbong Peak will take you to Seopjikoji. The name comes from the Jeju dialect for a “Cape of Small Land” due to its peculiar cliff formation that protrudes into the ocean. The picturesque harmony of the hill and ocean attract tourists all year round. You might even be able to sight Jeju ponies grazing on the field of grass.

Walking northeast along the cliff, you will arrive at Bulgeunoreum Volcanic Cone, offering an exquisite view of a white lighthouse with the dark blue sea in the background. Another noteworthy beauty of Seopjikoji is the Glasshouse and Yumin Art Gallery, two masterpieces designed by world-renowned architect Ando Tadao. The two buildings blend in remarkably well with the surrounding nature.

Observe the beauty of ridges at Yongnunioreum Volcanic Cone 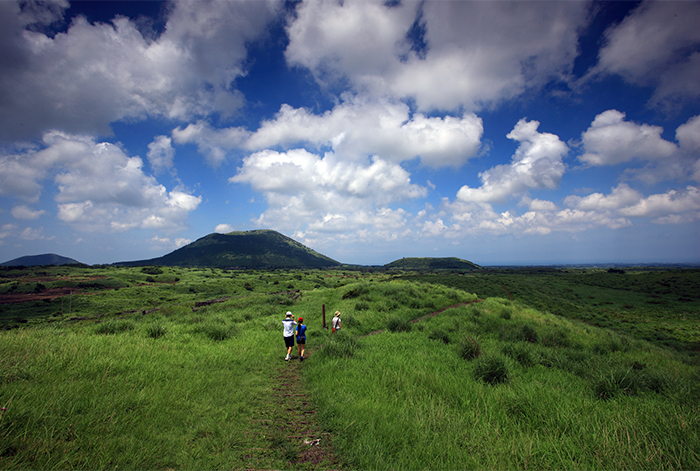 You can’t say you’ve been to Jeju Island without visiting one of the many oreum, Jeju dialect for volcanic cone. There are approximately 360 oruem scattered throughout Jeju. Among these hundreds of oruems, Yongnunioreum Volcanic Cone is undoubtedly the most well known. It’s not far from Seongsan Ilchulbong Peak and has a moderately gentle slope, providing a fairly convenient trail for trekking.

Both Seongsan Ilchulbong Peak and Udo Island can be seen from the peak of Yongnunioreum, offering an unforgettable experience. The view of curvy ridges along with the ocean also serves as an excellent backdrop for memorable photos. If you are looking for a perfect spot for souvenir photos, be sure to check out Yongnunioreum Volcanic Cone. 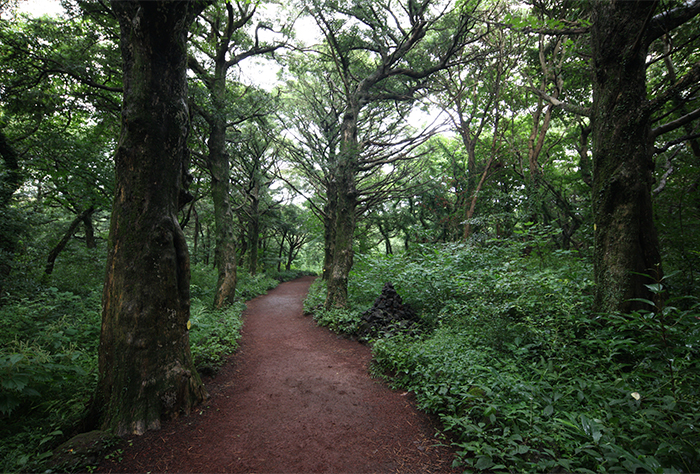 In contrast to Yongnunioreum’s open vistas, Bijarim Forest is an ideal spot for a relaxing forest retreat. The dense forest is home to hundreds of bija (nutmeg yew) trees, and is the largest forest in the world to be made up of one plant species. Most of the trees in the forest have lived for 500 to 700 years, earning the forest the nickname “Forest of a Thousand Years.” A must-see sight while at Bijarim Forest is none other than the 800-year old, conjoined nutmeg yews. 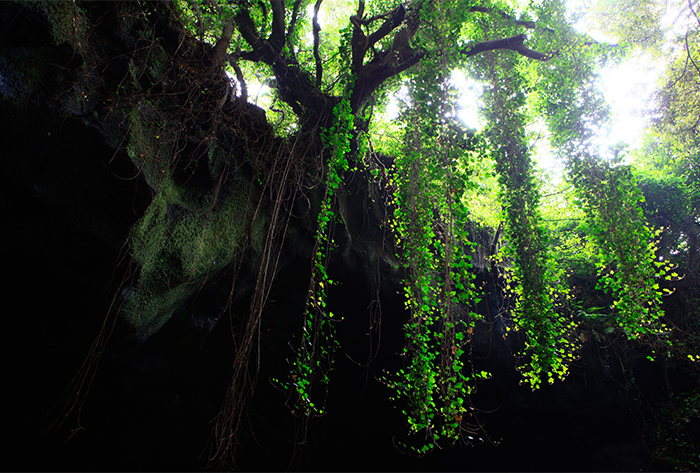 Of all the oreum on Jeju, Geomunoreum is the only volcanic cone to be included in the UNESCO World Natural Heritage site. The oreum holds over 20 caves within its body, although only Manjanggul Cave is open to the public. With its profoundly mysterious and grandeur appearance, taking a step inside the cave is like stepping into Hades’ underworld. Follow the tunnel of articulate lava rock formations, and you will soon reach a giant rock pillar that indicates the end of the cave. The cave’s temperature fluctuates within 11-21℃ regardless of season, allowing visitors to enjoy the magnificent cave all year round. 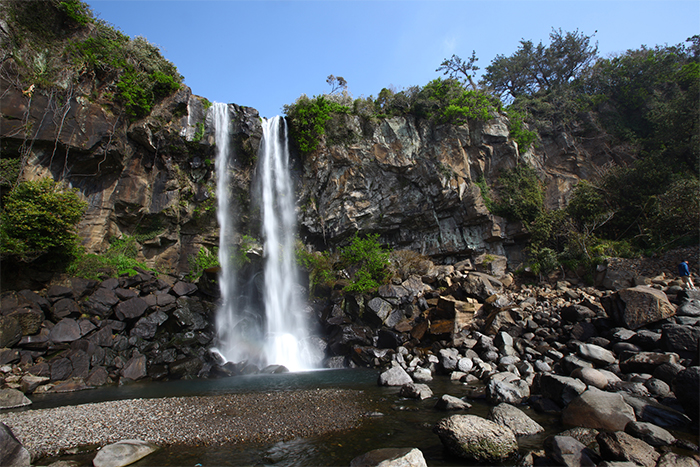 Seogwipo, which includes the entire southern half of Jeju, exhibits a great amount of sunshine and warm temperatures, attracting crowds of tourists all year round. One attraction many people choose to visit is Jeongbangpokpo Falls, one of the top three waterfalls on Jeju Island. The sight of water crashing 23 meters straight down off the cliff and into the sea will surely have goose bumps running all over your body.

Located on the cliff behind Jeongbangpokpo Falls is the Waljong Art Gallery. This gallery is dedicated to the Korean artist Lee Wal Jong, who settled in Jeju decades ago. The gallery is filled with his inspiring artworks, expressing the beauty of Jeju in his own unique way. The strategic location and the glass wall interior of the building also offer visitors an amazing view looking over the sea.

Jeju Jungmun Resort is blessed with not only beautiful natural scenery but also with numerous entertainment and convenience facilities catering to both domestic and international tourists. Jusangjeolli Cliff, near the International Convention Center Jeju, delivers a sight to behold with its gigantic rock pillars running along the costal line. Cheonjeyeon Falls, a three-tiered waterfall, is another attraction not to be missed in Seogwipo. While the first section of the waterfall is only active after rain, the second and third sections are active all year round.

Rekindle your childhood memory at the Teddy Bear Museum 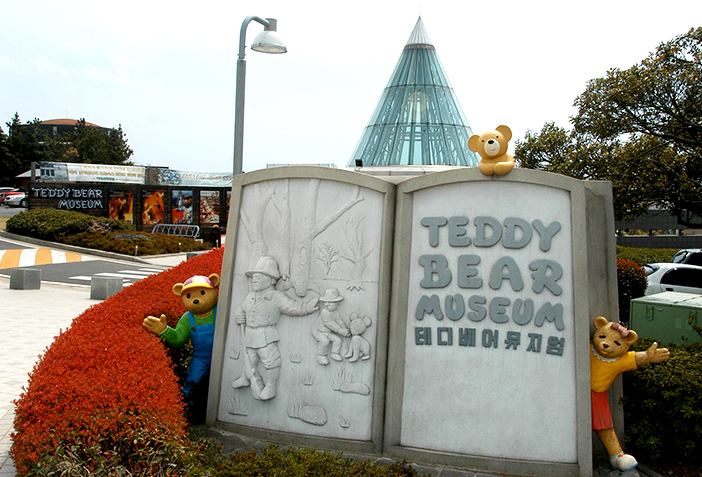 Another favorite tourist attraction at Jungmun Resort is the Teddy Bear Museum. The museum boasts quite an impressive collection of teddy bears from all over the world. Exhibition halls are designed with different themes related to teddy bears, such as 20th century history exhibition and fable parodies portrayed by teddy bears. The Teddy Bear Museum is a popular museum loved by visitors of all ages, recommended as an excellent place to visit with friends, families, or even on a date. The museum also has an outdoor souvenir shop, cafeteria, and a park that offers a splendid view. 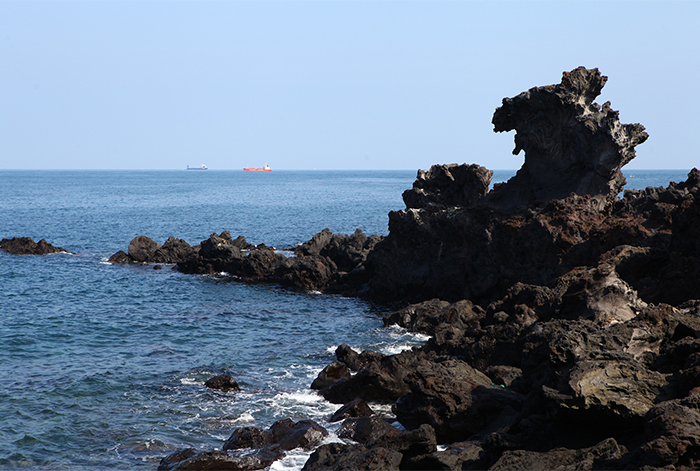 After visiting Yongduam Rock, head down to the Jeju Folklore & Natural History Museum to learn about the development of the island people and culture over time. Not only does Jeju Island have its own dialect, it also has a distinct culture that separates it from the rest of mainland Korea, all of which you can see and enjoy from a quick tour of the museum.

Right next to the museum is Samseonghyeol Shrine, a religious site that is also the birthplace of Jeju's ancient mythology. The shrine is not only historically significant, but it is also a fascinating ecological site. Although it may be small, the area has a captivating energy that will enthrall you.

* This column was last updated in June 2019, and therefore information may differ from what is presented here. We advise you to check details before visiting.