Cleanse Your Mind and Soul at Beopjusa Templestay! 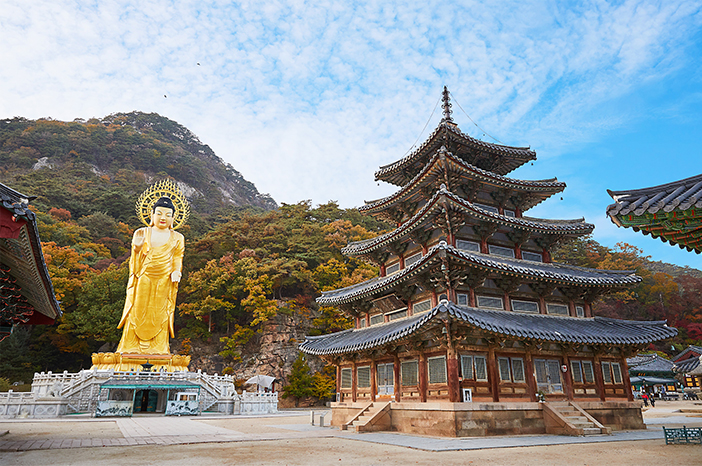 A world of peace and harmony opens up as you pass through Iljumun Gate, Single Pillar Gate, with a large sign written in traditional Chinese characters, Hoseojeilgaram, which translates to “Buddhist temple in Chungcheongbuk-do.” Similar to many temples in Korea, you must cross a bridge above a small stream, signifying the separation between the secular world and Buddha’s world, to get to the main gate of Beopjusa Temple, Geumgangmun Gate. After passing the main gate and through Sacheonwangmun Gate, Four Heavenly Guardians Gate, you will see the majestic Palsangjeon Hall, Hall of Eight Pictures, with Geumdong Mireukdaebul, Glit-bronze Maitreya Statue, on the left. Just behind Palsangjeon Hall, you can see Ssangsaja Seokdeung, Twin Lion Stone Lantern, and beyond that is the Main Buddha Hall, Daeungbojeon Hall, flanked by two trees appearing as guardians of the hall.

With a complete overlook of Beopjusa Temple, named a UNESCO World Heritage site in 2018, those with a keen sense might have noticed that the building arrangement of the temple is different from typical Korean temples. Compared to temples located at the foot of mountains with a terraced layout, Beopjusa Temple is located in a basin of Songnisan Mountain, secluded from society. For those looking for peace and energy, we will take you on a rejuvenating journey through Beopjusa Templestay.

All is Well! Beginning your Templestay 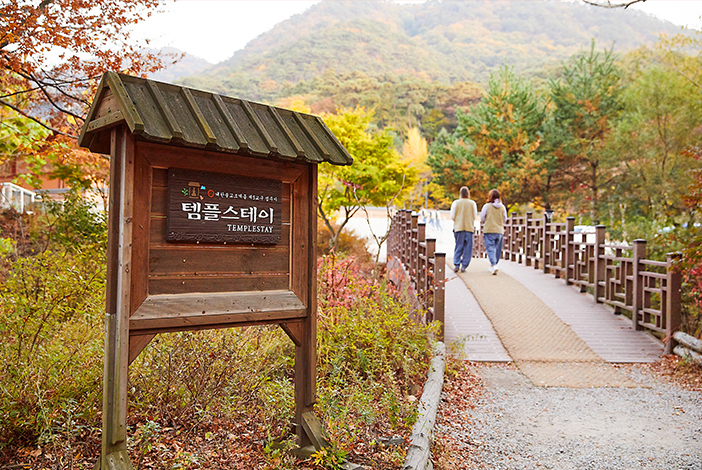 Templestay is a cultural experience program that gives participants a chance to leave the hustle and bustle of daily life and learn the basic concepts of Korean Buddhism and temple etiquette. With the title, “All is Well,” Beopjusa Templestay allows participants to focus inward and to find happiness while releasing stress. Feeling the breeze of Songnisan Mountain and listening to the flowing stream will calm the mind, while a slow stroll on the forest trail under the sunlight will refresh the body. 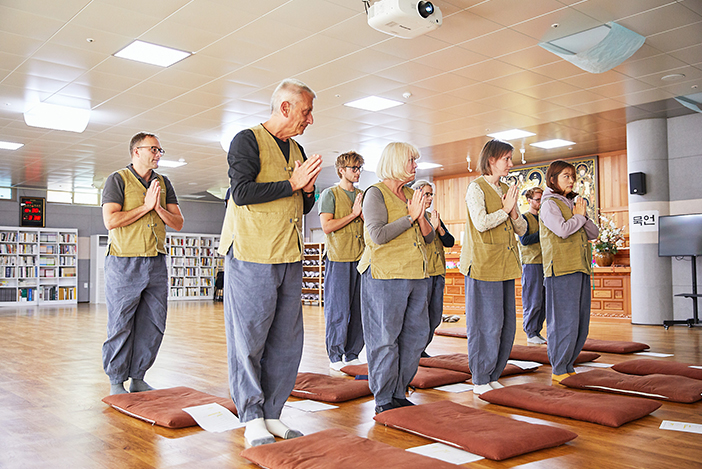 Even though the program is only for two days, learning the proper etiquette is important. At Beopjusa Templestay orientation, foreign participants are taught the meaning of Hapjang, holding palms together; Chasu, putting the right hand across the top of the left with your right thumb locked under the left, and placing them near the lower abdomen; and Sambae, three prostrations. It might be awkward at first, but these are essential during the duration of the templestay. 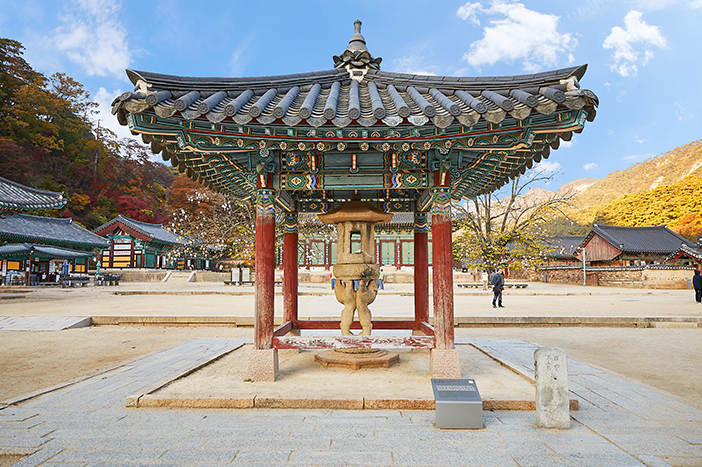 Beopjusa Temple holds three national treasures and 12 treasures as well as cultural assets and natural monuments. First, National Treasure No. 55, Palsangjeon Hall, is the only remaining five-story wooden pagoda built before the modern era, which also has within its inner walls Palsangdo, paintings of the Eight Great Events of Buddha’s life from birth to his enlightenment. Next, National Treasure No. 5, Ssangsaja Seokdeung, Twin Lion Stone Lantern, is in the form of male and female lions standing chest-to-chest holding the stone lantern. If you look closely, you can see that the lioness has her mouth open while the male lion has his mouth closed, symbolizing the beginning and the end. The monk explained that the lion is the symbol of wisdom in Buddhism and the shape of the lantern protects the Buddhist law. Last, Treasure No. 915, Daeungbojeon Hall, is where you can see the Buddha. A unique, stratified Buddhist temple structure, this large building has seven kan (Korean measuring unit; space between two pillars) in the front and four kan on the side.

Yebul, Beginning with the Beating of the Drums 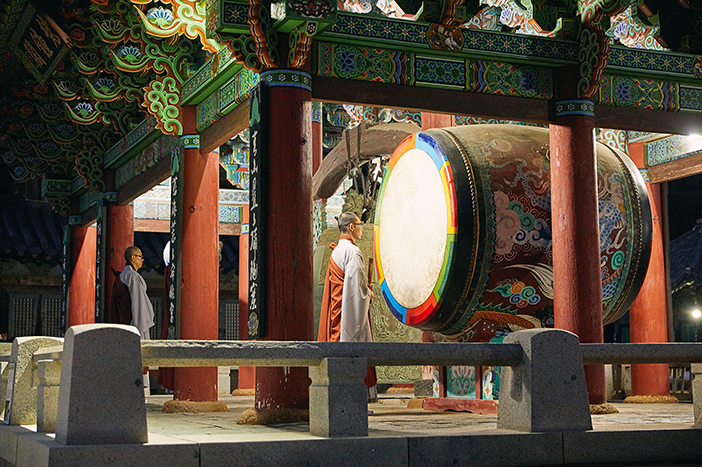 In Korean Buddhism, Yebul, or the Buddhist Ceremony, is performed twice a day, once in the early morning and once in the evening. Officially, yebul begins with Do Ryang Seok, cleansing of the temple, but for templestay participants, yebul begins with the beating of beopgo, the temple drum. Beopgo is a large drum with cow skin covering in the front and bull skin covering in the back. The front of the drum, facing Daeungbojeon Hall, is beaten before the evening yebul to mark another complete day of work, while the back of the drum is beaten before the morning yebul to awaken the world from idleness. During the drumming ceremony, the temple bell is also rung, with 28 rings in the morning and 33 rings in the evening. 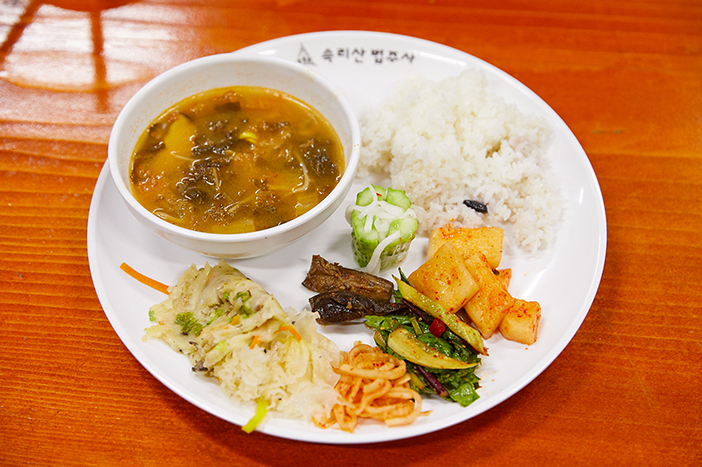 In Buddhism, a meal is called Gongyang. Gongyang, which means offering food or necessary items to one’s parents, teacher or neighbor with a respectful mind, has a slightly different meaning in Buddhism, in which it simply means offering a prepared meal. Because Buddhist monks do not eat meat or five pungent herbs including garlic, green onion, leek, chive and wild chive, all the meals are made based on vegetables. It is essential to only take as much as you can eat, while practicing mukeon, not speaking while eating, and washing the dishes after finishing everything on your plate. 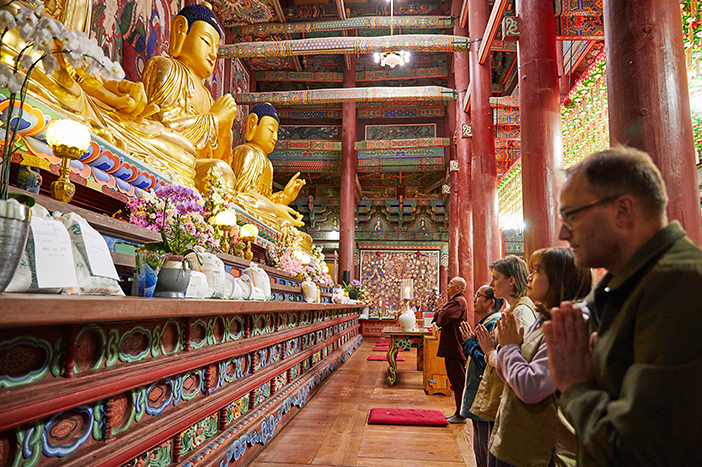 The most fulfilling yet most difficult part of the templestay is the 108 prostrations. Buddha categorized humankind’s agony into 108 sections, so to remove all the agony one by one, 108 prostrations are required. For foreigners who are more accustomed to sitting in a chair, the act might be hard on the knees, but taking a break from time to time while completing the 108 prostrations will help cleanse your mind. 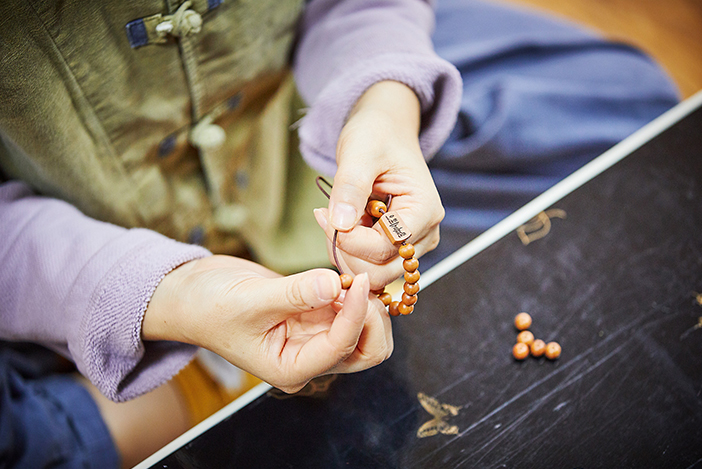 Stroll along Sejo-gil Trail & Tea Ceremony with a Monk 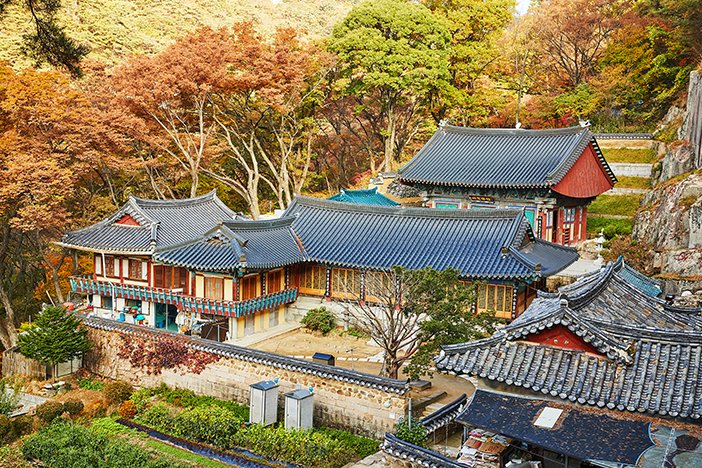 Even though the templestay is less than 24 hours in total, living like a monk is a difficult task for those who are used to the modern lifestyle. To complete the program with ease, the last session of the 2-day program is a walk around Sejo-gil Trail near Beopjusa Temple and tea ceremony with a monk. The clean nature of Songnisan Mountain can be felt throughout your body while walking on Sejo-gil Trail and the tea ceremony with a monk will give a lasting impression.

Sejo-gil Trail is named after King Sejo, who has a deep relation with Beopjusa Temple. During the late years of King Sejo’s life, he suffered from a skin disease. To find a cure for his disease, King Sejo went around different temples throughout the country including three visits to Beopjusa Temple. It is said that a pine tree at the entrance to Beopjusa Temple lifted its branches to help the king’s carriage pass with ease. With that act, the tree was honored with Jeongipum, a government position comparable to today’s vice-minister. The tree can still be seen today with the name Jeongipum Pine Tree. Sejo-gil Trail, which begins at Beopjusa Temple and ends at Saesimjeon Hall, holds many stories of King Sejo.

* This column was last updated in November 2019, and therefore information may differ from what is presented here. We advise you to check details before visiting.