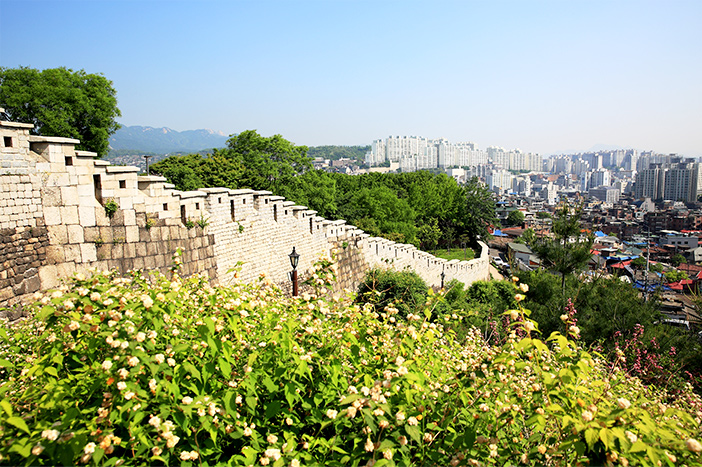 A season perfect for walking has returned. With many people out and about, try something different by going on a meaningful walk. If you are in Seoul, an excursion along the Hanyangdoseong, or the Seoul City Wall, is a must! With over 600 years of history, the Seoul City Wall is sure to offer a walk to remember.

Six Excursions along the Wall 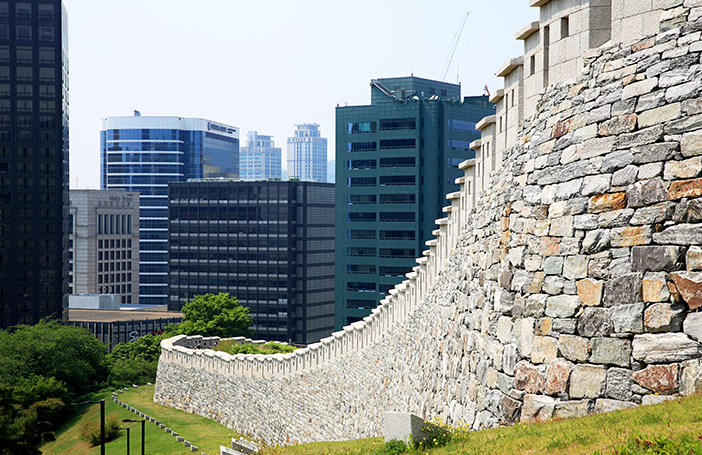 Sungnyemun Gate Trail along the western part of the Seoul City Wall begins at Baekbeom Square, passes by the Sungnyemun Gate, and finishes near the Site of Donuimun Gate. During the early 20th century, many parts of the city wall were damaged due to the city’s urbanization. Due to strenuous efforts, a near perfect reconstruction of the wall will leave visitors amazed as it is difficult to find flaws even with a close observation. As you walk along the trail, you will notice some cultural assets of Korea’s modern history, such as the Former Russian Legation, Simpson Memorial Hall at Ewha Girls' High School, and Chungdong First Methodist Church.

For those who would like to start the walk from Sungnyemun Gate (Namdaemun Gate), the fastest way to get to the trail is by coming out of Exit 5 at Hyehwa Station (Seoul Subway Line 4) and passing through Namdaemun Market. 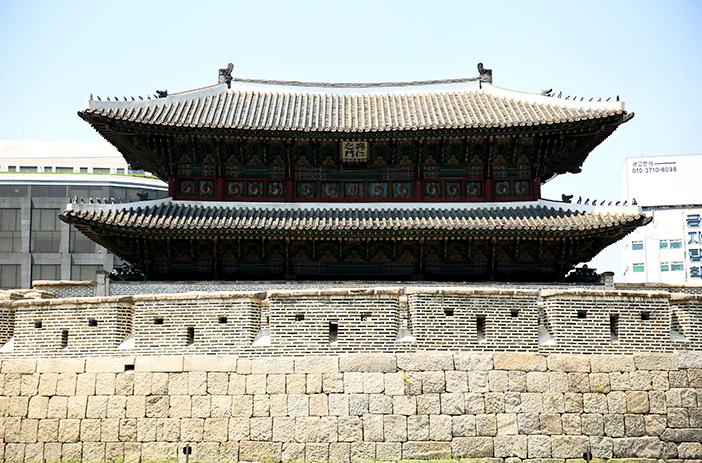 Heunginjimun Gate Trail along the eastern part of the Seoul City Wall begins from Heunginjimun Gate (Dongdaemun Gate), passes by the Igansumun Water Gate to the south and finishes on the southeastern side of Gwanghuimun Gate. Similar to the Sungnyemun Gate Trail, many parts of the city wall were damaged or destroyed during the city’s construction. The Igansumun Water Gate within Dongdaemun History & Culture Park was restored after Dongdaemun Stadium was demolished.

To get to the starting point of Heunginjimun Gate Trail, walk for approximately one minute from Exit 6 or 7 at Dongdaemun Station (Seoul Subway Line 1, 4). 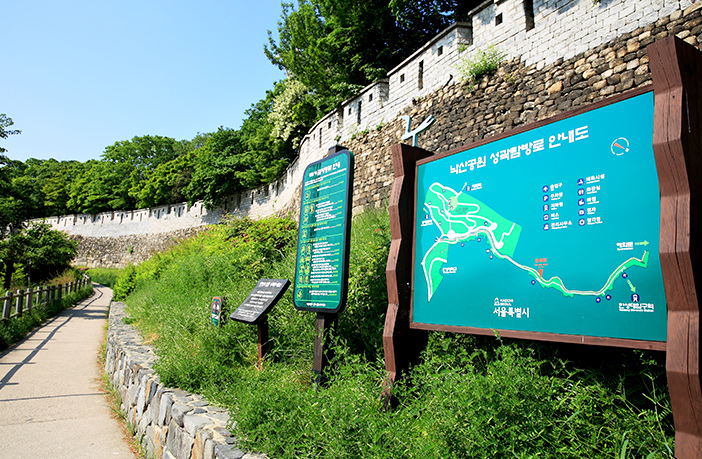 Naksan Mountain Trail, also on the eastern part of the Seoul City Wall, goes from Hyehwamun Gate to Heunginjimun Gate. As the lowest mountain among Seoul’s four mountains, the trail makes for a good stroll while checking out interesting fortress villages. The two must visit areas near the trail are Jangsu Village, for its natural beauty, and Ihwa Village, for its various museums. 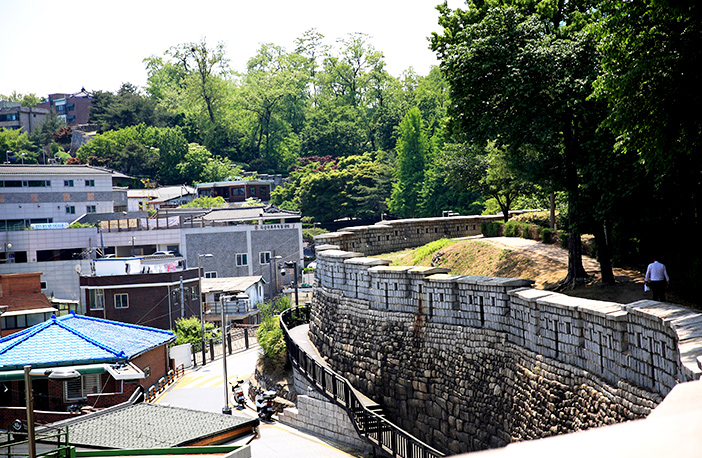 Namsan Mountain Trail follows the southern section of the wall. The trail goes over Namsan Mountain, also called Mongmyeoksan Moutain, connecting Jangchung Gymnasium in the east to Baekbeom Square in the west. The part of the city wall built in the 14th century can be seen from Namsan Mountain’s summit, presenting a wonderful sight throughout all four seasons. During spring and fall, in particular, the flowers and the fall foliage harmonize well with the wall.

To get to the starting point at Jangchung Gymnasium, you can either come out from Exit 5 or 6 of Dongguk University Station (Seoul Subway Line 3) and follow the Jangchungdan-gil Road, passing by Namsan J-Gran House, and walk towards National Theater of Korea. 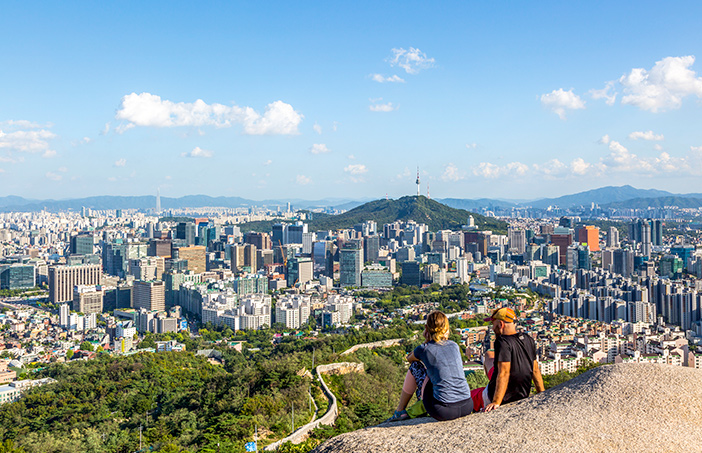 Inwangsan Mountain Trail located on the western part of the Seoul City Wall goes from Donuimun Gate to Changuimun Gate. Throughout Inwangsan Mountain, interesting rock formations can be seen, such as the Chimabawi Rock, a rock shaped like a skirt. 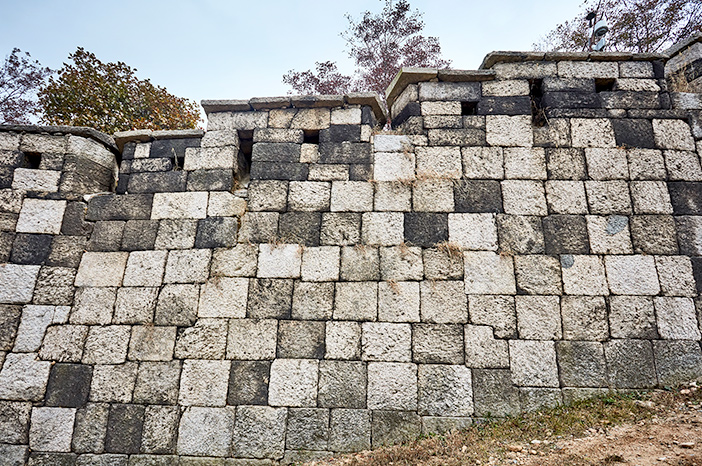 Baegaksan Mountain Trail starts from Changuimun Gate on the northwestern wall, passes through the Baegaksan Mountain, originally called Bugaksan Mountain, and finishes at Hyehwamun Gate in the northeast. Out of all the trails, the fortification and damaged walls throughout the history of Seoul City Wall is best preserved here. An amazing panoramic view of the city can be observed from Baegak Gokseong and Cheongundae. Gyeongbokgung Palace and Sejong-daero Road will feel as if they are just out of your reach from these popular viewpoints.

To get to the trail’s starting point at Changuimun Gate, come out of Exit 3 at Gyeongbokgung Station (Seoul Subway Line 3) and transfer to Green Bus No. 7212, 1020 or 7022 and get off at Jahamungogae Ridge Bus Stop, then walk for approximately two minutes. 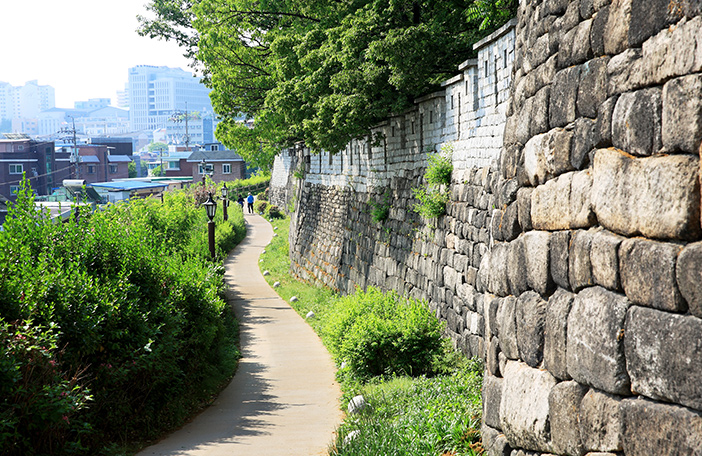 If it is your first time walking on any of the Seoul City Wall trails, a good start would be the Naksan Mountain Trail. With a mix of roads, mountain slopes, and alleyways, this trail offers beginners a perfect blend of what other trails have to offer. At the starting point in Hyehwamun Gate, there is a Hanyangdoseong Exibition & Visitor Center where visitors can get a trail map, pamphlets, and an art catalogue. The pamphlets about Seoul City Wall are available in English, Japanese, and Chinese. 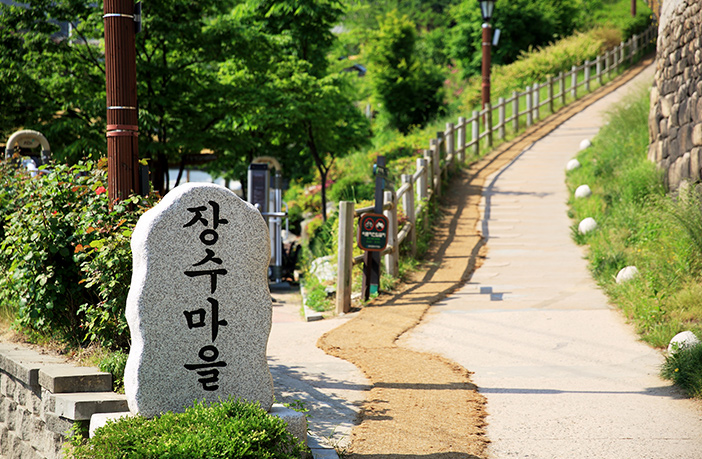 The main attractions you might see while walking the Naksan Mountain Trail are Jangsu Village, Ihwa Village, and Seoul City Wall Museum. Jangsu Village located below Naksan Park along the city wall was originally a slum village formed after the Korean War. Now with an average age of residents over 60 years old, the name Jangsu Village, which can be translated into Longevity Village, was given. When you go further down the trail, you will encounter Ihwa Village. Known for its artistic beauty, Ihwa Village offers 32 attractions, including galleries, museums, cafés, stores and more. Near the end of the trail, you can visit the Seoul City Wall Museum to learn about the 600-year long history of the wall as well as its value as a cultural heritage. 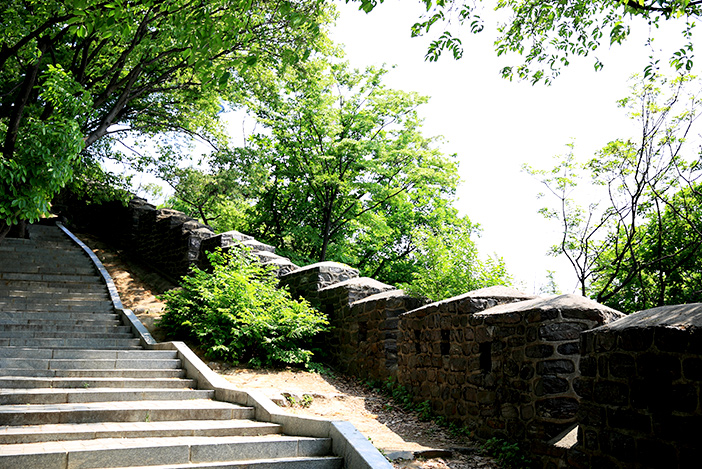 After completing the Naksan Mountain Trail, challenge yourself to the next level at Namsan Mountain Trail. This trail includes a major Seoul attraction, the Namsan Seoul Tower. You can get to the starting point on the back alleyway of Jangchung Gymnasium by coming out of Exit 5 at Dongguk University Station (Seoul Subway Line 3). As it takes a total of three hours to complete this trail, be sure have your stomach full before starting the walk. The famous Jangchung-dong Jokbal Street near Jangchung Gymnasium is a good place for a meal, with many restaurants offering jokbal (steamed pig trotters) as well as makguksu (spicy buckwheat noodles) and bindaetteok (mung bean pancake). 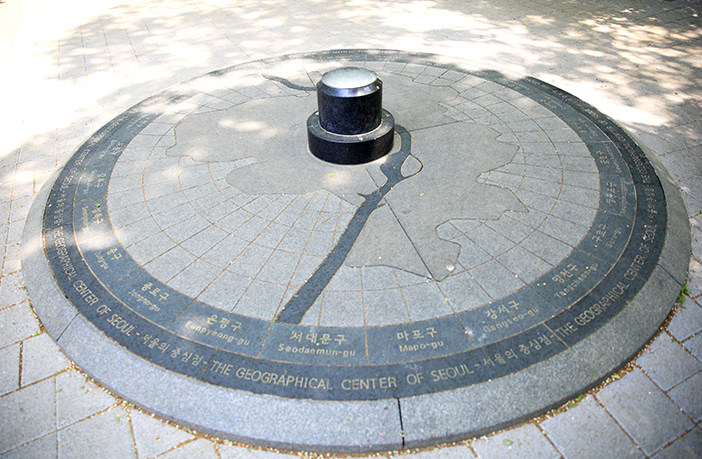 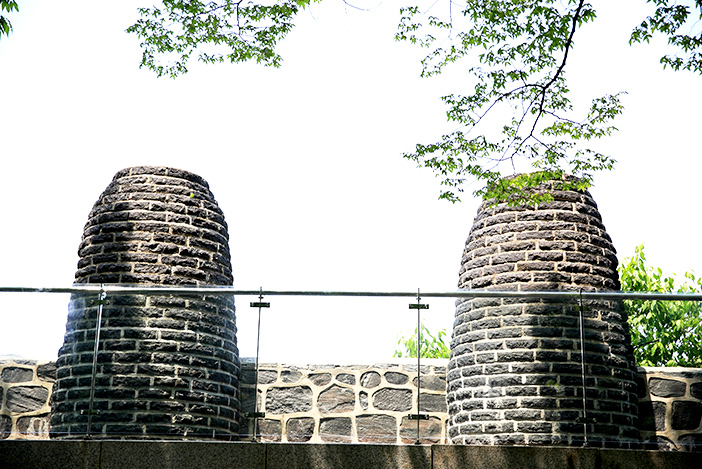 Along the trail, Namsan Beacon Mound Site, also known as the Mongmyeoksan Beacon Mound Site, can be seen. Previously called Gyeongbongsu, it worked as the commanding beacon for signals nationwide. Depending on the severity of the emergency, beacons situated throughout the country were used to light either smoke signals or fire to pass on the message to the capital. Another attraction, Jamdubong Photo Island, located in the middle of Namsan Seoul Tower, is a hidden spot known for a beautiful view of Seoul’s nightscape. Unlike at the peak of Namsan Mountain where the view of the city is obstructed by trees, this hidden spot offers a clear panoramic view of Seoul, perfect as a photo backdrop.

From Tuesdays to Sundays, the Namsan Beacon Mound Lighting Ceremony, the Beacon Mound Defense Ceremony, and the Noon Smoke Ceremony are held from 11:00 to 12:20. In addition, programs such as wearing traditional Korean clothes, photo session with the soldiers stationed at the beacon mounds and more are available free of charge.

* This column was last updated in May 2019, and therefore information may differ from what is presented here. We advise you to check details before visiting.