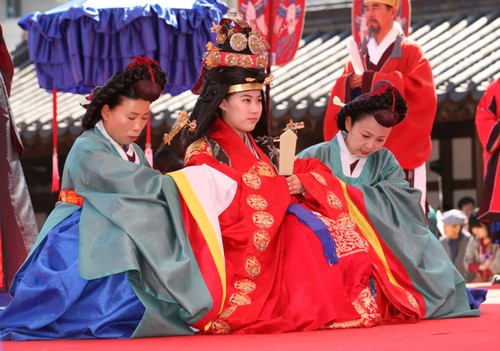 Introduction
In an effort to promote the majesty and grace of Korean royal culture and present a major traditional ceremony to the public, the Seoul Metropolitan Government hosts a reenactment of the royal wedding ceremony of King Gojong and Queen Min in the spring and fall every year.
The reenactment takes place at Unhyeongung Palace, the original site of the royal wedding ceremony that took place on March 21, 1866, for Emperor Gojong and his Empress Myeongseong. Based on thorough historical research and consultation by the palace’s counsel panel, the event is organized to commemorate the significance of Korean history and to shed some new light on a fading traditional culture.

Garye in Korean refers to a royal wedding or enthronement of the king; or a wedding or formal installation of a crown prince or his eldest son, or the prince imperial or his son. Because it is a major national ceremony, it is not uncommon for thousands of people to be mobilized during several months just for this event. Also, because of the strict and complex procedures and formalities of Joseon Dynasty royal weddings, the procedures were established according to a set of regulations. In all traditional Korean weddings, the groom customarily visited the bride’s house and brings her to his home. The same applied to the king. However, because common houses were limited in space, royal weddings were held at Byeolgung, known as detached palaces. For King Gojong and Queen Min, Unhyeongung Palace was used as the Byeolgung. The reenactment of the wedding starts with Eoga Haengnyeol, a royal procession led by a banner emblazoned with the king’s coat of arms, the yellow dragon. Following the coat-of-arms banner was the five directions banner and other traditional royal trappings. Then followed the Bisuchaeg Uisik, or the formal installation of Min as the queen, and the Chinyeong, in which King Gojong takes her as the queen. The wedding reenactment lasts for two hours.

This ceremony is an exact reenactment of the royal wedding ceremony of Joseon's imperial family. It offers a great opportunity to see royal costumes and the lifestyle of Joseon dynasty. The traditional royal costumes are spectacular and elegant, and the wedding displays such regal and grandeur distinction. After the ceremony, there is a photo session, so don’t forget to bring a camera.
Performance Times
October 20, 2018 / 14:00-17:00
Duration of Performance
About 2-hour
Age Limit
Open to visitors of all ages
Transportation
[Subway]
Anguk Station (Seoul Subway Line 3), Exit 4.
Go about 100m to arrive at Unhyeongung Palace on the left.
Homepage
www.unhyeongung.or.kr (Korean, English, Chinese, Japanese)