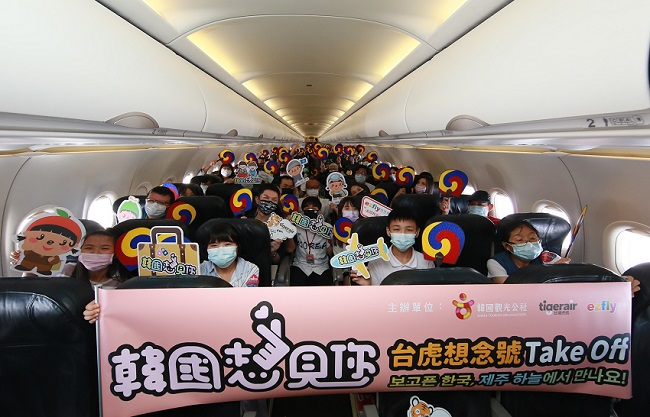 Photo: Tourists in the early bird promotion experiencing Jeju from above

In cooperation with the Korea Tourism Organization’s Taipei Office, Taiwanese travel agency Ezfly and airline Tiger Air released a flight experience package from Taipei to Jeju on September 11, just to be sold out in four minutes.

On September 19, 120 Taiwanese travelers took a flight from Taipei, traveled to Jeju Island to circle the island without landing and arrived back in Taiwan.

This flight package also includes a one-year voucher for roundtrip flight tickets from Taiwan to Korea that can be used after the COVID-19 travel bans are lifted. In addition, travelers could add a one-night stay at a hotel for 80,000 won.

The package also includes various programs for a chance to experience Korea. Passengers took photos while wearing hanbok before boarding as well as enjoyed other programs such as a seminar on Jeju travel and a quiz show on board the flight. The well-known fried chicken and beer meal, seen on K-drama series, was served as the in-flight meal.

Taiwan Tourists Visit Jeju from Above